A leading Swansea University scientist has been named as the first winner of a prestigious international honour.

Professor Andrew Barron, the Sêr Cymru Chair of Low Carbon Energy and Environment and Director of the Energy Safety Research Institute at Swansea University, has been presented with the Star of Asia International Award. 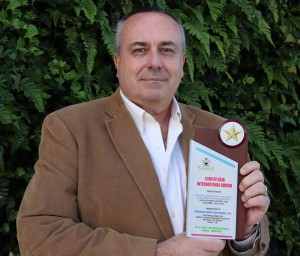 Hailed as the highest individual honour by the Association of Southeast Asian Nations (ASEAN) Union, the Star of Asia Awards are the leading international awards honoring excellence in education and industrial collaboration, as well leading the social impact of the ASEAN strategy.

Established in 2017, this year’s Star of Asia Awards received nearly 95 entries from worldwide. The award is biannually bestowed on individuals who are heavily involved at the strategic level of development and consultation to the organisations in ASEAN region. The Star of Asia Awards aim to celebrate the values of integrity, leadership, creativity, a service-first mind-set, and a “never give up” attitude, finding solutions, advising organisations while following up and ensuring they understand ideas.

Professor Barron received the award for his extensive work with governments, universities and industries in the ASEAN region.

He said: “It is a privilege to receive this award. I believe that interactions with partner institutions and industry must be to everyone’s mutual benefit. It is necessary to listen to what others say and create a strategy that provides a creative, sustainable, and meaningful interaction.”

The Awards are presented by the Open International University for Complimentary Medicines (OIUCM). Its Chairman the Honourable John Amaratunga, Patron and Trustee of Medicina Alternativa Sri Lanka, said: “The citation we received from the various agencies in the ASEAN region highlighted that Professor Andrew Barron had been greatly instrumental in change and analysis, demonstrating the importance of working with industries and universities.

“Hence, the Board of Trustees unanimously selected his nomination and approved him as the winner of the award. He is the first recipient of this award since it established in 2017.”

Professor Barron, formerly the Charles W Duncan Jr-Welch Chair of Chemistry at Rice University, is the current Director of ESRI where his research focuses on carbon capture, utilisation and sequestration (CCUS) as well as the development of strategies to decarbonize industry and lower the environmental impact of present energy systems.

He said: “The global environmental crisis facing humanity means it is more important than ever for academia to think internationally, collaboratively, and openly to meet the challenges of climate change. As such it is only through global partnerships that these challenges can be met.”

Swansea University Vice-Chancellor Professor Paul Boyle said: “We are very proud that Professor Barron’s world-leading work has been recognized on an international stage.

“His long-standing collaborations are an excellent example of the successful relationships our academics have forged with colleagues across the globe.

“We now look forward to supporting the continued research of Professor Barron and the team at ESRI in such an important field.”

Find out more about the Energy Safety Research Institute (ESRI)