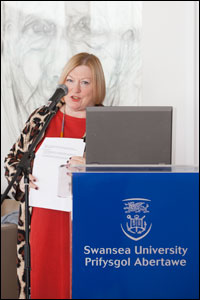 Funded by the EPSRC, the mid-range research facility, which is located within the University’s College of Medicine, offers comprehensive mass spectrometry facilities and services for leading university research groups throughout the UK, as well as having some commercial research opportunities.

Professor Hilary Lappin-Scott, Pro-Vice-Chancellor Research and Innovation and Strategic Development and Professor Keith Lloyd, Dean and Head of the College of Medicine at Swansea University and Professor Andrew Weller, Chair of Management Advisory Panel, NMSF, of the University of Oxford, welcomed invited guests to the opening, which included a tour of the facility with demonstrations.‌

“Investing in highly technical facilities like this new mass spectrometer is key to improving this research even further. It is also very pleasing to see Swansea University working in partnership with business to maximise the economic and social benefits of scientific research.” 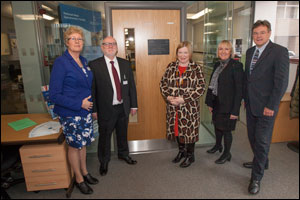 Professor Keith Lloyd, Dean and Head of the College of Medicine at Swansea University, said: “This facility is one of the four key research council centres in the medical school that helped drive our outstanding performance in the 2014 Research Excellence Framework to assess the quality of research in UK universities in which we came equal first in the UK for our research environment.”

For more information on the NMSF visit their website.