New research, led by Dr Ines Fürtbauer of Swansea University’s Department of Biosciences, published today (Tuesday, January 13) online in the British Ecological Society journal Functional Ecology, has revealed that stickleback fish with different personalities are equally “flexible” in how they respond to changes in predation risk. 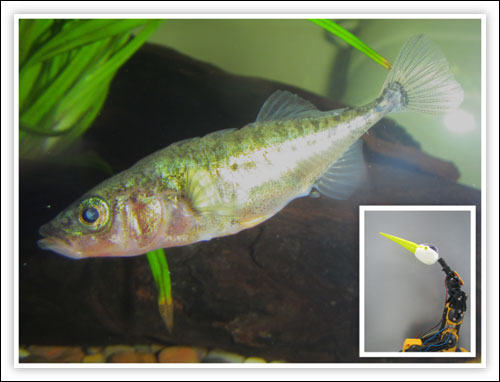 “With increasing human activity all over the world, animals have to deal with many more and many different changes happening very quickly. Understanding how animals adapt to such changes is therefore a major and outstanding question for biologists.”

Over five weeks, Dr Fürtbauer’s team experimentally manipulated the fish’s perceived predation risk by repeatedly showing them a robot that resembled a heron, a natural predator of the sticklebacks.

They wanted to see if the fish’s behaviour, and the fish’s stress hormone levels changed in response to the predator, and if so, if their personality had anything to do with the way they responded.

“We collected data on behaviour by tracking the fish movements from video, and measured the physiological stress response by measuring the amount of stress hormones the fish released into the surrounding water via their gills.”

The most important finding, however, was that fish with different personalities were equally capable of responding to a potentially harmful threat.

The researchers think that this approach – combining clever tracking technology for investigating fish behaviour, and non-invasively measuring their hormone levels from water – will transform the way we study individual differences in physiology and behaviour in small fish as well as how they respond to environmental change.