Dr Adam Booth, a post-doctoral researcher in Swansea University’s Glaciology Group, will travel to northern Sweden tomorrow (Friday, March 23), to lead a team of UK geophysicists on a two-week campaign of seismic investigations on the mountain glacier Storglaciären. 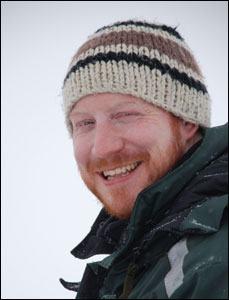 The team, which includes Professor Tavi Murray and PhD student Charlotte Axtell, also from Swansea University’s College of Science, and Dr Roger Clark from the Institute of Geophysics and Tectonics at the University of Leeds, will be based at the Tarfala Research Station, with support from the EU-funded INTERACT scheme.

The Storglaciären glacier, which sits around 150km north of the Arctic Circle in the shadow of Kebnekaise, Sweden’s highest mountain, is 3.2km long and has a maximum thickness of 230m.

Research on such mountain glaciers is important to the understanding of climate change.  In 2007, the Intergovernmental Panel on Climate Change (IPCC) reported that their melting currently contributes more to global sea-level rise than the larger Greenland and Antarctic ice sheets.

Specialising in the application of geophysical methods – specifically seismic and radar – to glaciological problems, Dr Booth uses geophysics both to measure the thickness of a glacier, and to quantify various physical properties of the ice and the material it sits on.

Dr Booth, whose work is funded by the Climate Change Consortium of Wales (C3W project), will be blogging from the field on GeoLog, the official blog of the European Geosciences Union, at http://egugeolog.wordpress.com/2012/03/20/seismic-spring-a-geophysical-field-campaign-on-storglaciaren-sweden/.