Swansea University has reached an important milestone in the development of its new Science and Innovation Campus. 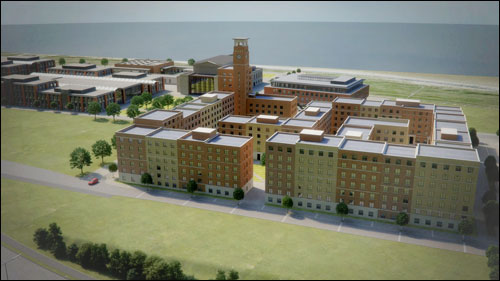 The Council (the University’s governing body) has agreed that the University will now move into the final stages of procurement on the project with the remaining bidder St. Modwen with its construction partner Vinci and expects to receive a detailed offer by the autumn of this year.

If these negotiations are concluded successfully it is expected that following the grant of detailed planning consent, work will commence on site in early 2013 and the new campus and new student residences will be occupied by Autumn 2015.

The proposed Swansea Bay Science and Innovation Campus would play a crucial role in building Wales’ knowledge economy, establishing the region as a vibrant location for high technology – as well as helping the University to realise its ambition to become a world-leader in research and innovation.  It would also act as a major economic regeneration driver in the south west Wales region.

Swansea University’s Vice Chancellor, Professor Richard B. Davies said: “The Council decision represents a significant step in the progression of this ambitious project, allowing us to enter into the final stage of procurement.

“The proposed development would enable the University to break out of its space constraints, allowing room for us to accelerate our growth strategy, capitalising on our research and development expertise and long-standing partnerships with major multi-national companies.

“The project also includes major redevelopment of our existing campus.

“The two campuses will become a catalyst for the growth of high-tech clusters for the digital economy, life sciences, and advanced engineering – making a major contribution to the economic regeneration of the region and beyond.”