Professor Amy Brown from Swansea University has today been recognised for her exceptional contribution to keeping the nation healthy. 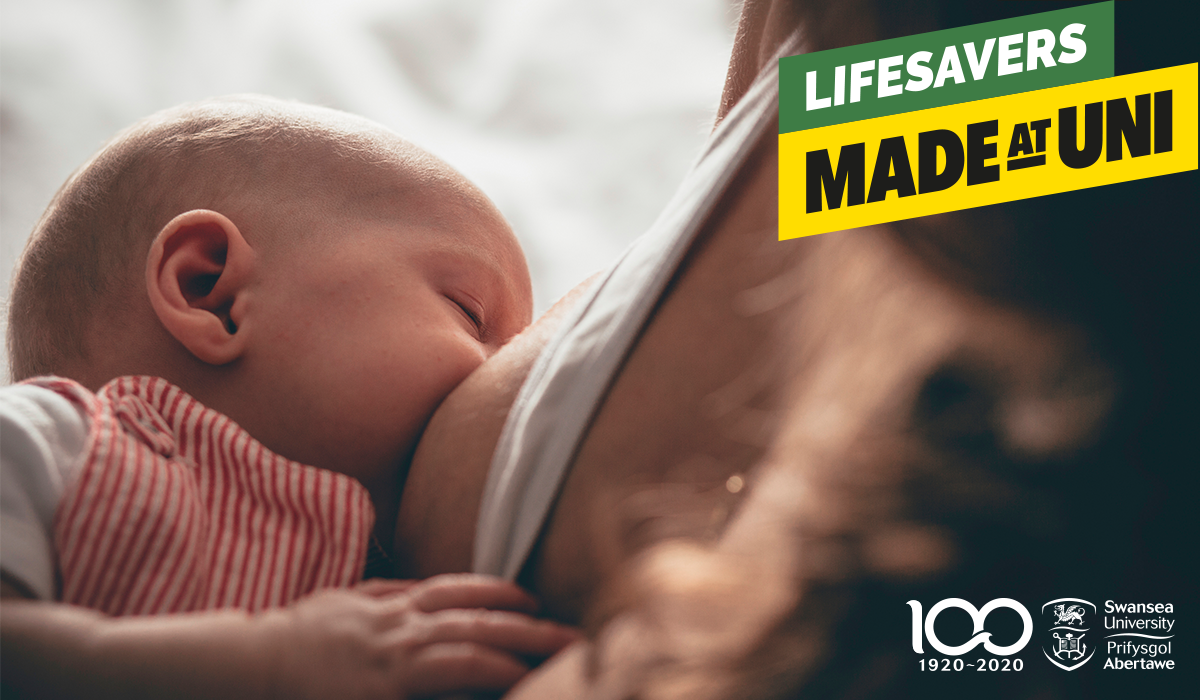 Professor Brown from the Department of Public Health, Policy and Social Sciences is one of the Nation’s Lifesavers – the top 100 individuals or groups based in universities whose work is making a life-changing difference to our health and wellbeing.

They have been named for the first time today as part of Universities UK’s MadeAtUni campaign, which brings to life the impact of universities on everyday lives.

Her research showed that breastfeeding works best when a baby’s needs for frequent feeds, night-time care and to be held are met. She found that many people were telling mothers that responding to their baby is wrong, and these normal behaviours mean breastfeeding isn’t working.

To challenge this, Professor Brown has worked with more than 30,000 mothers, collecting data on what normal baby behaviour looks like, how formula milk will not change this, and the damage strict babycare routines can have, both for breastfeeding and maternal wellbeing.

She has launched a public engagement campaign ‘Breastfeeding Uncovered’ using digital animations, blogging, social media, books and talks to raise awareness of what is normal and how breastfeeding mothers can best be supported. The campaign targeted not only mothers but those who help or hinder her success: partners, family, professionals and policy makers.

Reaching more than 250 million individuals it is globally recognised as equipping mothers with the knowledge, skills and confidence to breastfeed. Her work is used globally by the World Health Organisation, health boards, and breastfeeding organisations to support parent, practitioner and public education. Most importantly, mothers credit the campaign as empowering them with the confidence to continue breastfeeding.

The Nation’s Lifesavers are fighting diseases, helping new parents and children enjoy the best start in life, supporting older people and improving our mental health and wellbeing. The selection reveals the amazing use of technology, such as drones to fight malaria, a smart glove for communicating sign language and robots helping older people.

Universities from across the country were invited to nominate an individual or group who has made a significant contribution to the nation’s health and wellbeing. Over 100 universities from Plymouth to Dundee submitted a nomination.

“It is a fantastic honour to feature as one of the Nation’s Lifesavers for my work to help create an environment that supports breastfeeding. The MadeAtUni campaign is a great chance to celebrate the many ways universities are having a significant impact on our everyday lives.”

“When people think of lifesavers they tend to focus on the dedication and skill of our doctors, nurses, carers, and paramedics – many of whom are trained at universities. Every day, up and down the country, universities are also working on innovations to transform and save lives. Research taking place in universities is finding solutions to so many of the health and wellbeing issues we care about and the causes that matter.

“By proudly working in partnership with charities, the NHS and healthcare organisations, universities are responsible for some of our biggest health breakthroughs and in revolutionising the delivery of care.

“This campaign is a chance to bring to life the wonderful and often unexpected work going on every day in our universities and to celebrate some of the people working to make a life-changing difference to the nation.”

Research shows the public are proud of UK universities[1] but have little understanding of the benefits they bring, with most not being aware that UK academics are behind many of the discoveries that save lives and keep up healthy. The MadeAtUni campaign gives the public an insight into some of this work and celebrates those who made it happen. More information on the campaign can be found on the dedicated website: www.madeatuni.org.uk