How to improve your running? Smiling boosts efficiency, researchers find

The following article by Dr Richard Metcalfe of Swansea University and Dr Noel Brick of Ulster University was originally published by The Conversation. 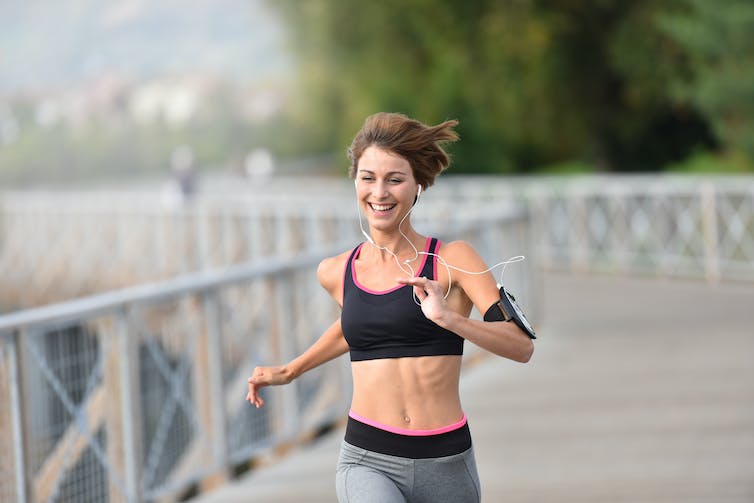 For athletes of all levels, endurance – how long they can keep going at their chosen sport – is made up of physiological and psychological factors. Physiological factors include cardiovascular fitness, and how efficient an athlete is at using energy (their “movement economy”). A critical psychological factor, on the other hand, is perceived effort, or how hard we feel we are working during an activity. The lower our perceived effort, the easier we feel that an activity is.

Crucially, any strategy that reduces how much an athlete perceives it to be an effort generally has a positive effect on endurance performance. One of the more surprising approaches could be to deliberately manipulate one’s facial expression. As peculiar as it may seem, many top athletes, including Olympic marathon gold medallist Eliud Kipchoge, strategically use periodic smiling during performance to relax and cope.

In addition, research has also suggested that intentional smiling may reduce effort perception during physical activity in comparison with frowning. However, until we began our latest investigation, no study had looked into the actual effects of facial expressions on movement economy or perceived effort during endurance activity that has a longer duration.

We asked 24 club-level runners to complete four six minute running blocks on a treadmill. Each six minute run was performed during a single session, with a two minute rest between each bout. During each run, participants either smiled (specifically a real or “Duchenne” smile, and not a fake smile), frowned (runners mimicked their own facial expression during intense running), attempted to consciously relax their hands and upper-body (by imagining they were holding a crisp but trying not to break it), or adopted their normal focus of attention during running.

Each participant also wore a breathing mask that allowed us to measure how much oxygen they consumed while running. By measuring the oxygen, we could work out how much energy the runner had used. After each run, we asked participants to report on a number of perceptual responses, including their perceived effort during the preceding six minutes.

Participants also reported a higher perceived effort when frowning than smiling or when attempting to relax their hands and upper body. 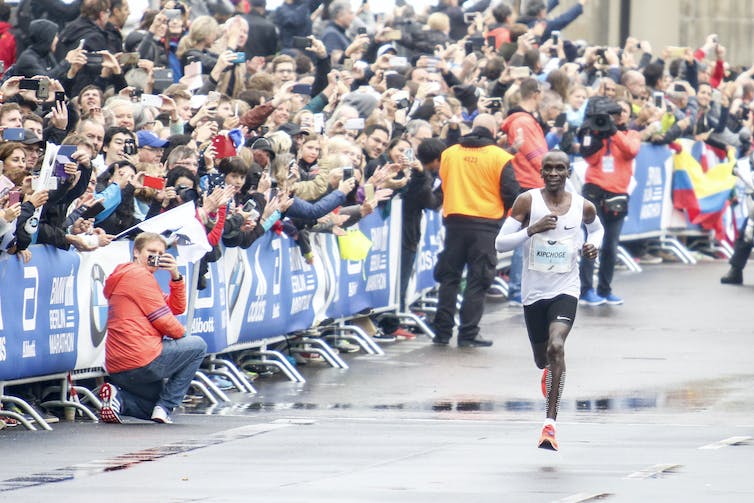 Collectively, these results suggest that smiling may be a beneficial strategy to improve running economy, and to reduce perception of effort in comparison with frowning. In contrast, not only does frowning reflect effort during physical activity, but may actually, in turn, increase our perception of effort.

But why exactly did facial expression impact the runners’ economy and perceived effort? Interestingly, our findings are supported by the concept of embodied emotion – the idea that adopting a facial expression can influence how emotions are experienced.

So what are the practical implications of this study? And how can you use this research to improve your own running performance? One implication is that smiling may be a useful strategy to improve economy and to make you feel more relaxed during running. In contrast, frowning may increase tension and make your run feel harder.

There are many questions we still need to answer, however. Firstly, how long should you smile for? Like Kipchoge, are periodic (30 second), bouts of smiling sufficient, or do we need to smile continuously like the runners in our study did? Secondly, does smiling also work during other endurance activities, like cycling or rowing? Finally, can a simple relaxation cue – to imagine delicately holding a crisp between your fingers – improve running economy with practice?

A longer training study might answer these questions but, for now, our recommendation is to pay some attention to your facial expression and to smile as much as you can during your run. Even when the miles seem gruelling, try to focus on pleasant memories, beam and say hello to people as you run past, grin at cameras on the sidelines, or even a small smile to yourself when you complete each mile will work too.

This article was originally published by The Conversation. Read the original article.