Former Vice-Chancellor knighted for his dedication to public service

Sir Robin, who was Vice-Chancellor from 1994 to 2003, was recognised for services to higher education, research and the Welsh language. 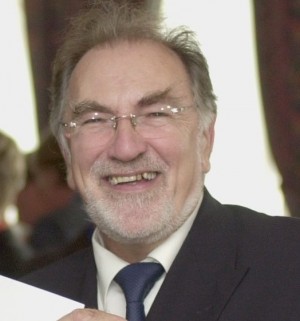 An internationally recognised physicist and Fellow of the Royal Society, Sir Robin has been an influential member on several prominent research bodies, volunteering his services for the UK Research Councils and 2008 Welsh Government Higher Education Task and Finish Group.

He has been a Council member and Vice-Chair of Techniquest, Wales’ largest science education charity and in 2010 was elected an Initial Founding Fellow of the Learned Society of Wales.

In 2015, he helped oversee Sêr Cymru, a successful £50 million investment to boost Wales’ research capacity and the following year  the Cabinet Secretary for Health and Social Services commissioned him to lead work considering scope for creating a single Wales-wide body for health workforce planning.

Since retiring he has provided significant service to several academic fields across Wales. A first-language Welsh speaker, he has worked tirelessly to champion the language. He led the group instrumental in setting up the Coleg Ffederal, later Coleg Cymraeg Cenedlaethol in 2011.

Professor Peter Dunstan, now Physics Programme Director at the University, is among the many who relished their time as a student of Sir Robin’s. He said:

“His reputation as a physicist stems from his passion for research in the areas of semiconductor physics, advanced electronic devices and nanotechnology, where he has published over 300 academic papers and books.

“Sir Robin’s research involved extensive industrial collaborations across the globe and the pioneering use of synchrotron radiation to study new materials.  His personality and excellence in research have positively influenced so many young scientists who have studied under his direction.”