A stunning new virtual reality film about Antarctica, which features a Swansea University scientist who was part of an Australian-led research team, has become a runaway success in Australia.

The film’s success comes as Swansea University glaciologists begin a major collaboration with the Institute for Marine and Antarctic Studies (IMAS) at the University of Tasmania, which will involve joint research into the effects of climate change.

The film – called The Antarctic Experience – chronicles a day in the life of scientists carrying out research at the Australian Antarctic Division’s Davis Station during the 2017/18 field season.

The first documentary of its kind, the half-hour film uses spectacular 360-degree camerawork with 4K, high-resolution images.   Virtual reality transports viewers to the heart of the frozen continent, where they can experience walking on an icy glacier, visiting a colony of penguins, and viewing the spectacular Southern Lights in high definition.

One of the scientists featured in the film is Swansea University glaciologist Dr. Sarah Thompson, currently an AXA fellow in the College of Science Glaciology Group.

Dr Thompson and fellow Swansea glaciologist Professor Bernd Kulessa took part in the Australian expedition to Davis and Casey stations in the East Antarctic.  They were surveying glaciers and meltwater systems, using helicopter radar as well as passive seismic and electrical geophysical surveys.  This research was the basis of the film.

The film was shown at the Western Australian Museum in Fremantle, where its run was extended to cope with demand.  It is now being shown in the National Museum of Australia in Canberra.   It is then set to be released in the rest of the world.

The film’s success comes as Swansea University’s Glaciology Group, with leadership from Professor Bernd Kulessa, is setting up a strategic partnership with the Institute for Marine and Antarctic Studies (IMAS) at the University of Tasmania, bringing particular expertise in areas such as cryosphere geophysics, satellite remote sensing and ice sheet modelling.

Together, scientists from the two institutions and a range of other international partners will undertake joint research into the effects of climate change on the Australian Antarctic Territory, covering around 45 % of the East Antarctic Ice Sheet’s coastline. 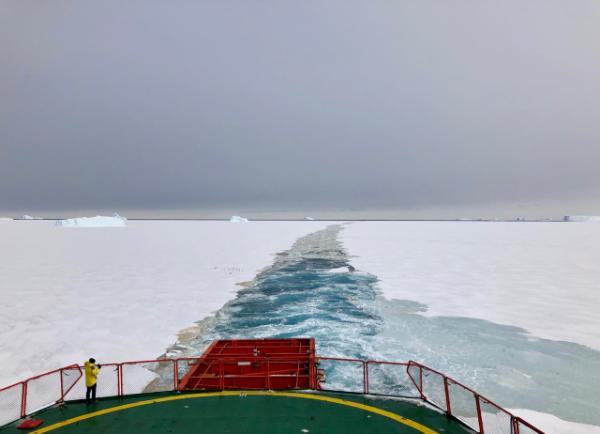 Picture:  the Aurora Australis icebreaker ship crossing the Southern Ocean, with Swansea University glaciologists on board.  Read more about this trip.

Dr Sarah Thompson, the Swansea University glaciologist who features in the film, said:

“Few are fortunate enough to travel to Antarctica. Even fewer experience what it is like to live there.   But what happens in Antarctica is crucial for all of humanity.

So I was very pleased to take part in the film.  It shares our research with a wider audience and it shows what an extraordinary place Antarctica is.  The film really is the next best thing to being there.”

“The teams at Swansea and IMAS each have a strong track record of polar research. Now, by joining forces in this partnership, we can greatly boost our efforts to understand the effect of climate change on the Antarctic.”

Find out more about our glaciology research