Swansea sports science expertise has played a part in the extraordinary success of British Skeleton athletes competing in the Winter Olympics.

The sport accounts for 3 of the 4 medals which Great Britain has won in the competition so far.

For the past twelve years, sports science experts at Swansea University have been supporting British Skeleton and its athletes, to improve their pre-competition routines.

Professor Liam Kilduff and Professor Christian Cook from Swansea University added academic expertise to a number of key studies on priming the athlete to help boost their performance. 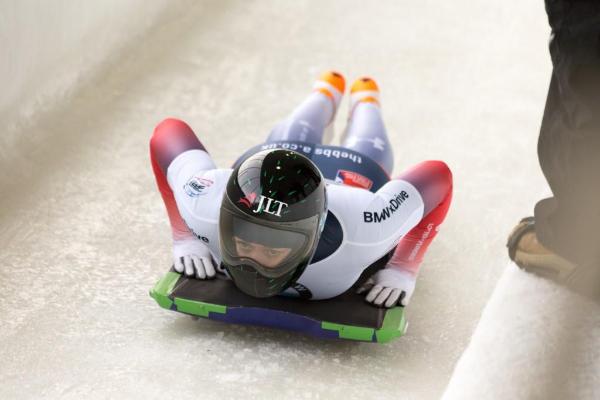 “Three medals for British Skeleton and their athletes is a wonderful achievement. It’s great for us here in Sports Science to have played a small part in their overall programme success.”

The collaboration between Swansea experts, UK Sport and British Skeleton stretches back for the last 3 Winter Olympic cycles.

For British Skeleton, the 3 medals from PyeongChang add to the golds won by Amy Williams (2010 Vancouver) and Lizzy Yarnold (2014 Sochi).

Professor Kilduff paid tribute to the close partnership with British Skeleton, and their Head of Performance, Danny Holdcroft:

Danny is a great example of a very forward-thinking Head of Performance who wants to embrace key sports science research in an applied setting. He along with other key members of his team helps drive the research to ensure it answers their key performance issues.”

"As a performance programme, we are driven to deliver performance at the pinnacle of our sport, the Winter Olympics.

As part of this, we explore many avenues and try to be innovative around the methods that we use to physically train and prepare our athletes. Having institutions such as Swansea University is key to supporting us in answering performance questions and we are grateful for the support that Prof Liam Kilduff has given us"

“We pride ourselves here at Swansea University in conducting research that has real life implications.  We are ranked 5th in the UK for our research impact in Sport Science. By working with teams like British Skeleton this model aims to continue producing research that makes an impact on elite and professional sport.”

Professor Kilduff leads the Welsh Institute of Performance Science, which conducts research to enhance the performance of Welsh athletes at major games in collaboration with all the universities in Wales.

He travels to the Australian Institute of Sport in Canberra in early March to present on his research in the area of pre-competition strategies.