30% of the UK’s natural gas could be replaced by hydrogen, cutting carbon emissions

Almost a third of the natural gas fuelling UK homes and businesses could be replaced by hydrogen, a carbon free fuel, without requiring any changes to the nation’s boilers and ovens, a pioneering study by Swansea University researchers has shown.

Over time the move could cut UK carbon dioxide emissions by up to 18%.

Natural gas is used for cooking, heating and generating electricity.  Domestic gas usage accounts for 9% of UK emissions.  In an effort to reduce annual carbon emissions, there is presently a concerted effort from researchers worldwide to offset our usage of natural gas.

Enriching natural gas with hydrogen is one way forward.  Experiments have shown that modern-day gas appliances work safely and reliably with hydrogen-enriched natural gas as the fuel.  It is already used in parts of Germany and the Netherlands, with a £600m government-backed trial in the UK taking place this year.

The question the Swansea team investigated was how far they could increase the percentage of hydrogen in natural gas, before it became unsuitable as a fuel, for example because the flames became unstable. 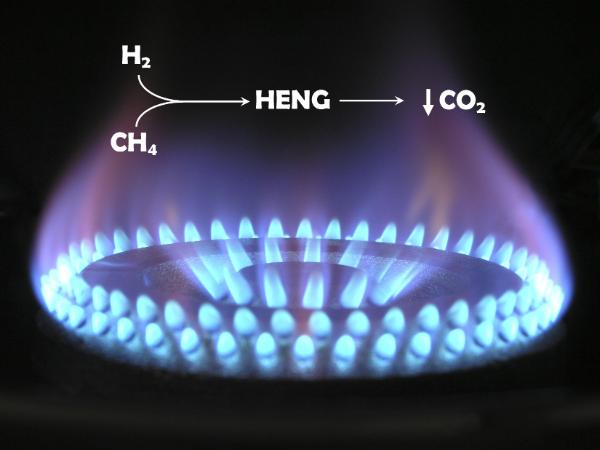 The research was published by the Royal Society of Chemistry.

“Up to 30% of the UK’s gas supply can be replaced with hydrogen, without needing to modify people’s appliances.

Hydrogen-enrichment can make a difference now.  But it could also prove a valuable stepping-stone towards a future, pure hydrogen, zero carbon gas network.”

The research was supported by the Welsh Government Sêr Cymru Program, FLEXIS, which is partially funded by the European Regional Development Fund, and the King Saud University as well as by the Welsh Government through the Sêr Cymru Chair for Low Carbon Energy and Environment.  Co-author is Waheed Al-Masry  an assistant professor in  the Department of Chemical Engineering at King Saud University, Riyadh, Saudi Arabia.

Find out more about the College of Engineering at Swansea University