A one trillion tonne iceberg – one of the biggest ever recorded - has calved away from the Larsen C Ice Shelf in Antarctica, after a rift in the ice, monitored by the Swansea University-led MIDAS project, finally completed its path through the ice.

The calving occurred sometime between Monday 10th July and Wednesday 12th July, when a 5,800 square km section of Larsen C finally broke away.

The final breakthrough was detected in data from NASA’s Aqua MODIS satellite instrument, which images in the thermal infrared at a resolution of 1km.

The iceberg weighs more than a trillion tonnes (1,000,000,000,000 metric tonnes), but it was already floating before it calved away so has no immediate impact on sea level. The calving of this iceberg leaves the Larsen C Ice Shelf reduced in area by more than 12%, and the landscape of the Antarctic Peninsula changed forever. 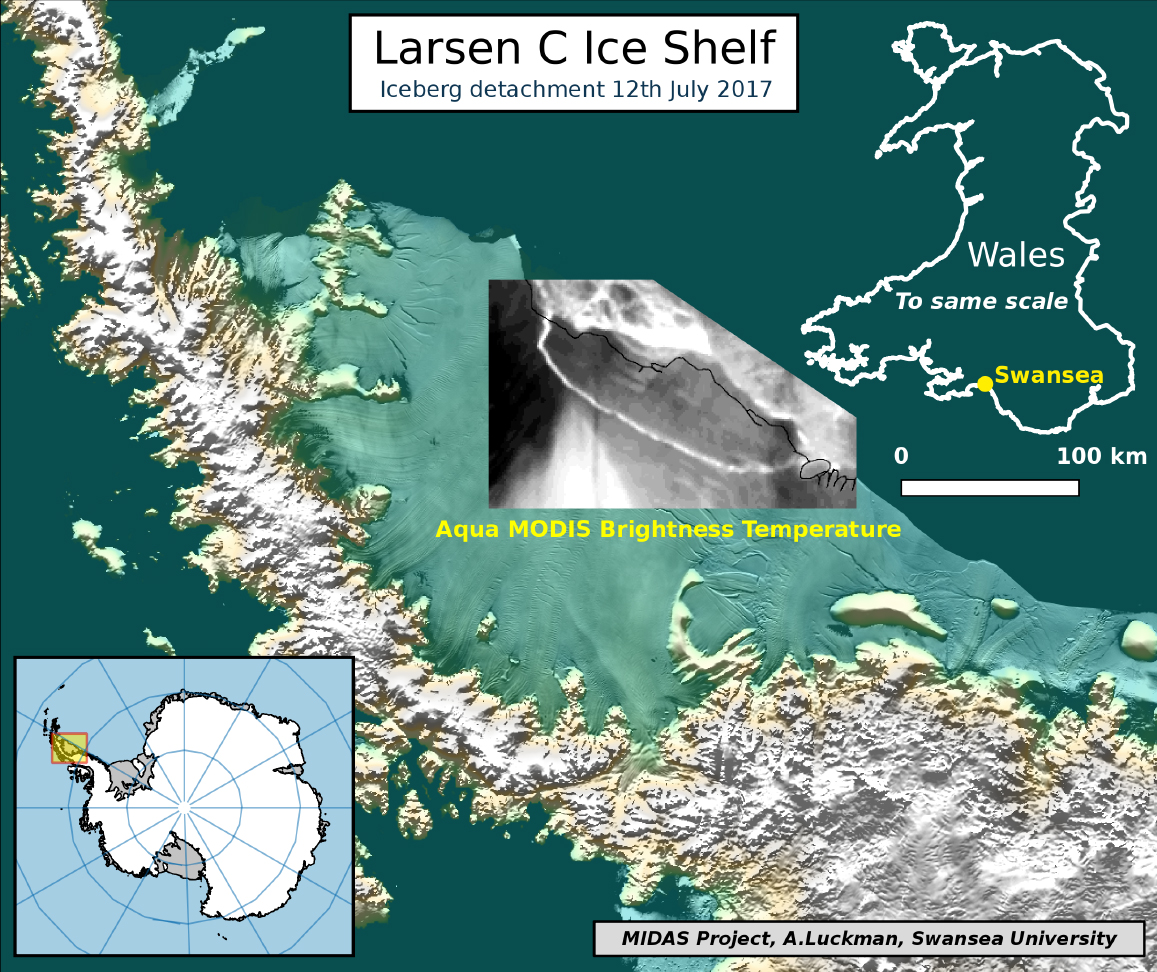 ‌The map shows the detachment of  the iceberg, based on data from NASA’s Aqua Modis satellite.

The development of the rift over the last year was monitored using data from the European Space Agency Sentinel-1 satellites – part of the European Copernicus Space Component. Sentinel-1 is a radar imaging system capable of acquiring images regardless of cloud cover, and throughout the current winter period of polar darkness. The detachment of the iceberg was first revealed in a thermal infrared image from NASA’s MODIS instrument, which is also able to acquire data in the Antarctic winter when cloud cover permits.

Although the remaining ice shelf will continue naturally to regrow, Swansea researchers have previously shown that the new configuration is potentially less stable than it was prior to the rift.  There is a risk that Larsen C may eventually follow the example of its neighbour, Larsen B, which disintegrated in 2002 following a similar rift-induced calving event in 1995.

Professor Adrian Luckman of Swansea University, lead investigator of the MIDAS project, said: “We have been anticipating this event for months, and have been surprised how long it took for the rift to break through the final few kilometres of ice. We will continue to monitor both the impact of this calving event on the Larsen C Ice Shelf, and the fate of this huge iceberg.

The iceberg is one of the largest recorded and its future progress is difficult to predict. It may remain in one piece but is more likely to break into fragments. Some of the ice may remain in the area for decades, while parts of the iceberg may drift north into warmer waters.

The recent development in satellite systems such as Sentinel-1 and MODIS has vastly improved our ability to monitor events such as this.”

‌Aerial view of the rift in the Larsen C: Credit: John Sonntag/NASA

The Larsen C Ice Shelf, which has a thickness of between 200 and 600 metres, floats on the ocean at the edge of The Antarctic Peninsula, holding back the flow of glaciers that feed into it.

Researchers from the MIDAS Project have been monitoring the rift in Larsen C for many years, following the collapse of the Larsen A ice shelf in 1995 and the sudden break-up of the Larsen B shelf in 2002.  They reported rapid advances of the rift in January, May and June, which increased its length to over 200 km and left the iceberg hanging on by a thread of ice just 4.5 km (2.8 miles) wide.

The team monitored the earlier development of the rift using a technique called satellite radar interferometry (SRI) applied to ESA Sentinel-1 images. While the rift is only visible in radar images when it is more than 50m wide, by combining pairs of images, SRI allows the impact of very small changes in ice shelf geometry to be detected, and the rift tip to be monitored precisely.

Dr Martin O’Leary, a Swansea University glaciologist and member of the MIDAS project team, said of the recent calving: “Although this is a natural event, and we're not aware of any link to human-induced climate change, this puts the ice shelf in a very vulnerable position. This is the furthest back that the ice front has been in recorded history. We're going to be watching very carefully for signs that the rest of the shelf is becoming unstable."

Professor Adrian Luckman of Swansea University added: “In the ensuing months and years, the ice shelf could either gradually regrow, or may suffer further calving events which may eventually lead to collapse – opinions in the scientific community are divided. Our models say it will be less stable, but any future collapse remains years or decades away.”

Whilst this new iceberg will not immediately raise sea levels, if the shelf loses much more of its area, it could result in glaciers that flow off the land behind speeding up their passage towards the ocean. This non-floating ice would have an eventual impact on sea levels, but only at a very modest rate.