Professor Hilary Lappin-Scott, Senior Pro-Vice-Chancellor of Swansea University, has given a keynote address at this year’s British Science Festival in Brighton on Women in science: Changing culture, improving diversity.

“I’m delighted to have the opportunity to come and speak at the British Science Festival after the great experience we had of successfully hosting the 2016 Festival in Swansea,” said Professor Lappin-Scott, who blogs on equality issues and is the recipient of a prestigious WISE hero award for her work on promoting women in science. 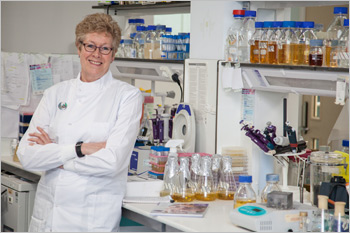 She told the audience at the Festival: “We have a leaky pipeline in academia – women disappear. They make up the majority of the higher education workforce, but the most senior roles are still overwhelming filled by men.

“The question is, how do we change this? There is no magic formula for success, but in a globally competitive market, it’s vital that universities use all the talent they have at their disposal.

“At Swansea University, we used different strategies, most of them low cost, to really change the culture.”

These initiatives included the setting up of a network of senior woman to support and mentor others, celebratory inspiring women campaign for International Women’s Day, and support for the Athena Swan and Stonewall awards. The University also changed its promotion processes, leading to a 40% increase in the number of female academics being promoted to associate professor and professor roles.

Professor Lappin-Scott said: “At Swansea University we are championing diversity at all levels. We know we have a long way to go, because this is a journey without an end, but we are pleased with the steps we’ve taken so far, and are committed to making more progress.”