Swansea University has been confirmed as the main sponsor for this summer's free Wales Airshow.

The event, organised by Swansea Council, will take place on Saturday July 1 and Sunday July 2.

First held in 2007, this will be the third consecutive year the Wales Airshow has been held in Swansea.

Last year, the Airshow, part of the Enjoy Swansea programme of events and activities, attracted more than 200,000 spectators. As well as from the promenade, many people also watched the Airshow from the city centre, Mumbles and a number of other vantage points across the city. 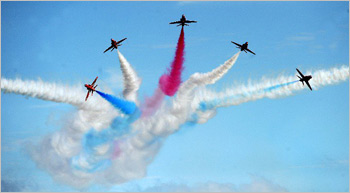 "Swansea University has been involved in the Airshow in the past, having previously sponsored the Red Arrows at the event, so to have them as the main sponsor of the 2017 Wales Airshow further cements the event partnership that's already been established.

"As always, our aim is to make the Wales Airshow as successful and memorable as possible for many thousands of local people, visitors to the city and our sponsors.

"Back in 2015, we said we'd do all we could to make the Airshow an annual event in Swansea for the benefit of residents and businesses. Holding the Airshow for a third consecutive year demonstrates our commitment to delivering on that promise."

Professor Richard B Davies, Vice Chancellor of Swansea University, said: "The whole Swansea region should be proud that Swansea University was named the top University in Wales and the inaugural Welsh University of the Year in the 2017 Good University Guide published by the Times and Sunday Times newspapers. As part of our celebrations, we are delighted to partner with our friends at Swansea Council to support the Wales Airshow.

"Our Department of Aerospace Engineering is recognised as one of the top 200 in the World and seventh best in the UK, with many of our academic staff and students working on projects with large companies such as Rolls Royce and Airbus, as well as the Bloodhound car which will likely break the land-speed record this year. We encourage you all to come and visit our exceptional facilities on offer at both our Singleton and Bay Campuses, and we look forward to welcoming future Swansea University students at our open days on June 17, October 14 and October 28."

Some of the aircraft that took part in last year's Wales Airshow included the Red Arrows, the Battle of Britain Memorial Flight and a Russian MiG from the Cold War. Details of the aircraft taking part in this year's event will be announced over coming weeks.

Visit http://www.walesnationalairshow.com/ to be kept up to date with Wales Airshow news.

This is a Swansea Council news release. Visit http://www.swansea.gov.uk/news