Swansea University lecturer to feature on BBC's Who Do You Think You Are?

Dr Aled Eirug is a senior lecturer in the School of Management, a member of Swansea University's Rhodri Morgan Academy and a specialist in the history of the First World War in Wales. On Thursday 24 August Dr Eirug will feature in Who Do You Think You Are? 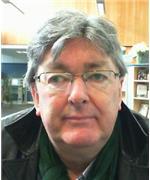 The programme will also feature television presenter Fearne Cotton and her search for the story of her great-grandfather, Evan Meredith, a miner from Abertillery.  Aled Eirug, pictured, whose research area is on the Opposition to the First World War in Wales will tell Meredith's story from his opposition to the War on socialist grounds to his arrest, court martial and imprisonment in 1918.

Dr Eirug said: “Evan Meredith was one of many hundreds of coalminers in south Wales who opposed the War and in 1917, was one of those who stopped conscription from being introduced into the mining industry for almost a year. This untold story reflects how opinions towards the Great War created conflict in the coalmining districts of south Wales in particular.

While much of the current century commemoration of the Great War has naturally concentrated on the human tragedies of battles and armies, this story reminds us that a minority of brave men opposed the War.”

View Who Do You Think You Are? on iPlayer.