The Times and the Sunday Times Good University Guide 2018, to be published this weekend, shows that Swansea University has gone up a further eight places to 36th in this year’s league table, the highest position for Swansea in a UK league table.

Swansea continues to make strong progress after its strong showing in last year’s league table, which saw it claim the inaugural Welsh University of the Year 2017 title.

Professor Hilary Lappin-Scott, senior pro-vice-chancellor, welcomed the results: “I am particularly pleased to see our graduate prospects result is once again among the very best in the UK and top in Wales. This result provides our students and prospective students with confidence the University will support them to go on and achieve great outcomes. We actively work to enhance and provide our students with the necessary knowledge, skills and placements to become global graduates capable of securing a graduate level job six months after graduating. We have clearly shown over time this is a key strength and something we do exceptionally well. 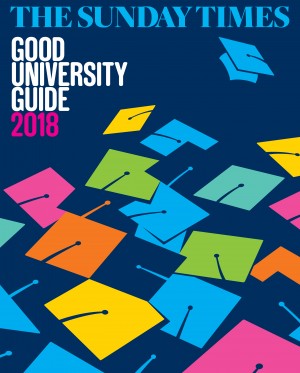 “The results in the Times league table round off a very successful year for Swansea University that has also seen us achieve a silver award in the inaugural Teaching Excellence Framework, another Athena SWAN silver award and achieve our highest ever position among the top 300 institutions in the highly regarded THE World University Rankings 2018. We also now have a wide range of subjects that are world-ranked, further recognising the quality of teaching offered and the research undertaken at the University. These achievements are built upon the dedication and hard work of all staff involved and we should all be proud of how far the University has come in recent years.”

The Times and Sunday Times Guides give the most comprehensive guide to higher education in Britain. It includes profiles on 131 universities and the definitive UK university rankings. The league table is made up of nine indicators including student satisfaction with teaching quality and their wider student experience, research quality, graduate prospects, entrance qualifications held by new students, degree results achieved, student/staff ratios, service and facilities spend, and degree completion rates.

Swansea’s latest ranking reflects the University’s ambitious campus development programme, with a £60m upgrade of the Singleton Park Campus just two years after opening the spectacular £450m Bay Campus in September 2015. The next phase of the Bay Campus development is due to open in 2018, which includes a £31m Computational Foundry, intended to turn Swansea and the surrounding region into a global destination for computational scientists.

The University’s outstanding achievement in the 2014 Research Excellence Framework (REF2014) is also recognised, where four-fifths of the work submitted was assessed as world-leading or internationally excellent, with health, English, and general engineering subjects excelling.

The full guide is available free in this weekend’s edition of The Sunday Times.