A sixth-form student from Ysgol Bro Dinefwr in Llandeilo is heading to Houston, Texas, to take part in a NASA Space School, with support from Swansea University, which has strong links with Texas.

Ffion James, 17, will be part of a group of 50 students from over 20 countries taking part in the NASA-run programme, which runs from 23 July to 7 August.

The theme of the summer school is “A Manned Mission to Mars”. Students will be assigned to teams looking at different aspects of planning a space mission to the red planet: mission control, operations, transit, habitation, and exploration. 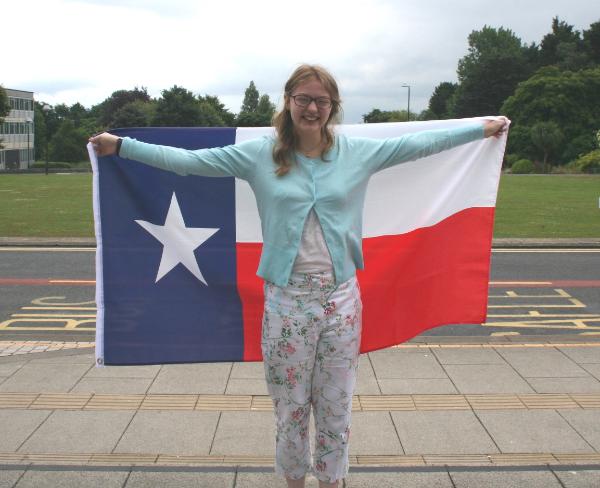 Picture:  Ffion flies the Texas flag at Swansea University, ahead of her trip to NASA in Houston

Whilst at the summer school, students will be taught by aerospace experts. They will also get a chance to tour the Johnson Space Center, the Space Center Houston, and other science and technology organisations. They will also link up with the International Space Station, and take part in a teleconference on life sciences, bio-astronautics, and aerospace medicine at a university.

Ffion, who is currently studying for her AS levels at Ysgol Bro Dinefwr, said that her love of space went back many years:

“I’ve always been fascinated by stars especially – there’s something peaceful yet dangerous about them.

I got my love of Star Trek from my dad!   I always loved problem-solving and puzzles, and I used to save up my Christmas and birthday money to buy telescopes.

I’ve already been to the NASA launch site at Cape Kennedy 3 times.  I’ve spoken to people involved in the missions, which really inspired me.“

The work started for Ffion long before the summer school begins. As part of her preparations she has to complete tests and exams set by NASA.

Ffion and her fellow students are already in touch on social media, before they all travel to Houston.  Once in Texas, they will all be staying with host families, many of whom work with NASA and the aerospace industry. 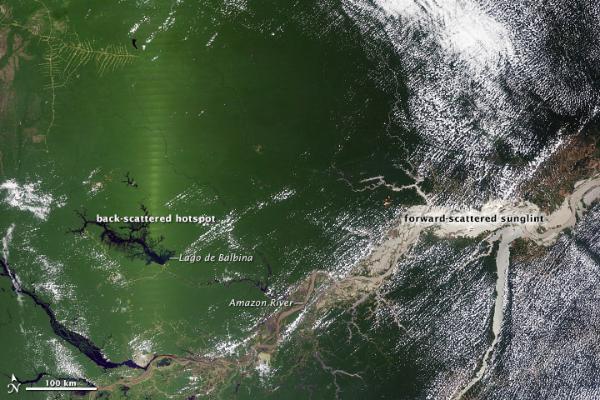 Picture:  NASA satellite image of the Amazon, used in a collaborative research project with Swansea University

Ffion explained the kind of challenges she will face as part of the curriculum:

“NASA wants to be international, with close links for example between the US and Russia on the International Space Station.  So one of the big issues they have to address is language and cultural differences.

We’ll have to face this at the summer school.  We have to work in teams, and we’ll have to establish a way of communicating between people who don’t have the same language.”

Ffion added that her dream job would be to be working in the space industry, sorting out problems at ground level:

“I’ve always been a problem-solver, so I’d be very interested in areas such as working out the most efficient flight trajectories.

I study ethics at the moment, and so I’m also fascinated by ethical questions to do with space travel.  Is it right to expose travellers to Mars to high radiation levels on what would be a three-year journey?    Would humans still be humans if they adapted to life on Mars?  What are the ethics of people ageing at a different rate, as would be the case if they were on Mars?”

As well as grappling with these weighty ethical questions, Ffion said that she was also looking forward to experiencing life in the US, learning about other cultures, adding that top of her wish list for souvenirs was the famous Texan cowboy hat!

Swansea University has a strategic partnership with several top-ranking universities in Texas, including several in Houston.   These links are already bringing benefits such as student exchange schemes and joint research collaborations, in areas from arts and humanities to nanotechnology.

“The University’s links with Texas go from strength to strength, with students and researchers seeing the benefit.   It is always great to see local students seeking to broaden their horizons, so we are delighted to support Ffion’s success in winning a place at the NASA Summer School.” 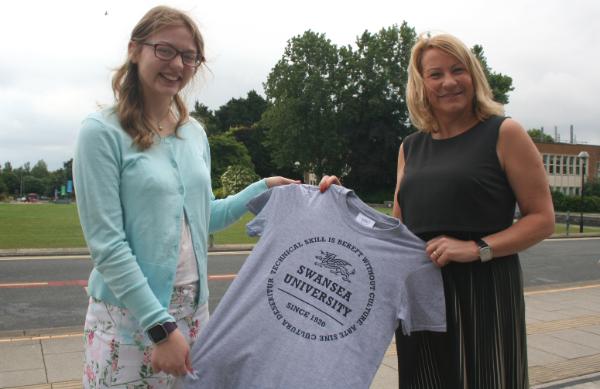