To mark the 50th anniversary of the death of Vernon Watkins, Swansea University’s Professor in Creativity, Owen Sheers, has invited five award-winning Welsh poets to write a response to Watkins’s work. 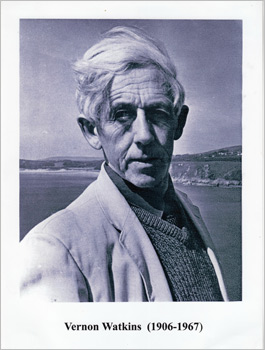 Entitled The Strings of Song, the free event will be a celebration of the poetry of the late Gower poet Vernon Watkins in reflection and response. The free event will take place on the evening of Monday, October 2, at 7:30pm at the Taliesin Arts Centre, Singleton Park Campus, Swansea University.

Esteemed Welsh poets Rhian Edwards, Menna Elfyn, Paul Henry, Robert Minhinnick and Jonathan Edwards will read and discuss the poetry of ‘Swansea’s other poet’ before sharing their own new work.

Of the occasion, Professor Sheers, a celebrated poet and writer himself, said: “The creation of poems was the presiding spirit of Vernon Watkins’s life, so I’m especially pleased that we can mark this anniversary not only by revisiting the best of his work but also by commissioning five new poems from some of Wales’s finest contemporary poets.  The event promises to be a special communion of the past and the present, a meeting of lyrical voices and minds.”

Chairing the evening will be Professor of English and holder of the Emyr Humphreys Chair of Welsh Writing in English at Swansea University, M Wynn Thomas. Professor Thomas OBE, is a leading academic and authority on Welsh literature and culture including many poets such as R S Thomas, Alun Lewis and the Maesteg born Watkins.

He said: “Vernon Watkins deserves much better than to be forgotten. He is a fine, fascinating poet whose vision of life is utterly distinctive. No wonder that the likes of Philip Larkin and Kathleen Raine were among his admirers.”

Dylan Thomas once called his great friend and poetic sounding board “The most profound and greatly accomplished Welshman writing poems in English”, but who really was the quiet, family orientated, mild mannered bank clerk whose poetry so often spoke volumes of Wales and the world around him? 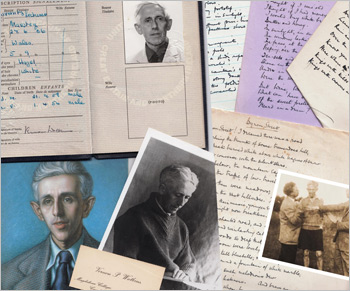 A fascinating new exhibition at Swansea University will shed further light on the poet who admitted was a ‘slave to the muse’.

Vernon Watkins 1906-1967: Poet of Gower, in partnership with Jeff Towns, Honorary Fellow of Swansea University, and Dylan's Mobile Bookstore, includes a group of early manuscript poems, original letters, rare editions of his books, ephemera and photographs of Vernon and his family.

Mr Towns, who has been a collector of the works and personal effects of great writers such as Dylan Thomas and Vernon Watkins for more than 40 years, played an instrumental role in helping to secure the ‘lost’ fifth poetry notebook of Dylan Thomas at auction for Swansea University in 2014.

Of the poet that is most synonymous with Gower he said: “We should not forget that Vernon Watkins met W B Yeats, was published  by T S Eliot, famously befriended and encouraged Dylan Thomas, and also acted as a mentor to David Jones and was the catalyst behind Philip Larkin’s first collection, The North Ship.

“When he died, in 1967, Philip Larkin wrote his obituary and Vernon was being considered for Poet Laureate, after the death of John Masefield. He is so much more than ‘Swansea’s other poet’.”

The exhibition, which is also free to view, runs from midday on Saturday, September 30, until 5pm on Monday, October 30, at the Singleton Park Campus Main Library.  Presented in association with Dylan's Mobile Bookstore and Research Institute for Arts and Humanities.

The Strings of Song is a free event but a ticket will be required. To book your place please call 01792 602060, or visit www.taliesinartscentre.co.uk. Presented in association with Literature Wales, Research Institute for Arts and Humanities, CREW.

Three of the featured poets Rhian Edwards, Robert Minhinnick and Jonathan Edwards along with Professor Owen Sheers will also be appearing at The Poetry Bookshop at Hay on Wye (next to the clock tower) from 2pm on Saturday, October 7, as it opens its door to customers on the first day at its new premises. Admission is Free. Presented in association with Swansea University and Literature Wales.