Salmonella could be basis for new cancer treatments

Harmless versions of the bacteria Salmonella could be used to deliver a new generation of better cancer treatments, research at Swansea University Medical School has shown.

Unlike chemotherapy and radiotherapy, these treatments would be non-toxic, would target only the tumour, leaving healthy tissue unaffected, and could require only one dose.

The Salmonella bacteria would be used as a vehicle for delivering therapeutic molecules to attack the tumour.

The technology at the heart of the approach is called RNAi, a natural process that cells use to turn down, or silence, the activity of specific genes.   Professor Paul Dyson, who is leading this work, has previously used this technology to develop a pesticide-free weapon against insects that cause sleeping sickness and damage crops, research which was funded by the Gates Foundation.

Professor Dyson is now examining how RNAi can be used to develop better cancer treatments.  He and Dr Claire Morgan, cancer research scientist at Swansea University Medical School, have been working for the past year on a proof-of-concept study, a first phase of research, funded by the Welsh Government, using prostate cancer as an example.

The first phase has also been supported by £8,000 raised for prostate cancer research by local fundraiser Robert Taylor, with the help of consultant urologists Mr Pradeep Bose and Mr Neil Fenn from ABM University Health Board.

Professor Dyson and Dr Morgan aim to continue the research aimed at prostate cancer, but the technology could also be used with other cancers.  Additional Welsh Government funding has also been secured to examine whether this approach could also be used to treat breast cancer and colorectal cancer.

Cancer Research UK will be co-funding the next phase of research under its Pioneer Award Scheme, to “develop the cancer treatments of tomorrow”.

A Salmonella sample in the Swansea University Lab

“One dose of this treatment could be enough:  that is the real breakthrough from this first phase of our research.  We found that the bacteria multiply and continuously produce the therapeutic molecules which keep targeting cancer cells.    This is very different from existing approaches to cancer, where repeated rounds of treatment are necessary.

Using a harmless strain of Salmonella to deliver the treatment would also make it non-toxic, as it would leave healthy tissue unaffected.   These are important steps forward, and our tests have shown that everything worked as we had predicted.   Further research is necessary, however, to see for example how the technology works with other cancers, and metastatic cells.

The funding from Cancer Research UK and the Welsh Government is therefore very welcome as it will enable our team to continue their work.”

Robert Taylor from Capel Hendre (pictured with wife Shirley), originally from Carmarthen, was treated for prostate cancer in 2013, and raised money to help fund the first phase of the research. 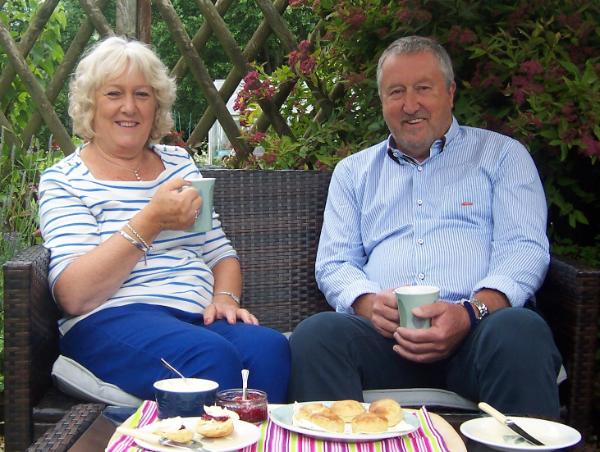 “I was diagnosed with prostate cancer in April 2013 and underwent a radical prostatectomy later that summer.

Whilst awaiting my treatment, I decided that I wanted to raise money to help others in the same situation as me – as both a means of coping with my illness and as a way of focusing on getting better.  I was determined to raise £10,000 and knew what I wanted to do to achieve this.

I had worked as a fundraiser for twenty years with both Tenovus and Ty Hafan so I was fully aware of the excellent work that can be achieved with much-needed additional funds.  As a cycling fan, I was keen to organise a bike ride and set about doing this as soon as I was discharged.

With the help of family and friends, we held a 45 mile bike ride around the Towy Valley in April 2014 – a year after my operation.  We raised the target of £10,000 on that day and had great fun along the way.

When I contacted my consultant at Morriston Hospital, Mr Bose, to let him know about the money we’d raised he told me about some pioneering research that was being undertaken by Swansea University.  They needed some additional funding to continue with their study and it just so happened that the money we had raised could help them do just that.

I am so pleased that part of the money we raised is contributing towards such ground-breaking research into prostate cancer.  Along with family and friends, we recently had the pleasure of meeting the research team who told us all about their exciting and potentially life-changing work.  I am both thrilled and proud to have contributed to what could potentially mean a new and alternative treatment for this cruel disease.”

“Our Pioneer Award is about encouraging innovative ideas from any discipline that could be groundbreaking in tackling cancer. The Award backs higher risk, truly novel ideas that have the potential for high reward in understanding, preventing, diagnosing or treating cancer.

Paul’s idea could potentially attack tumours from two angles: releasing RNAi molecules that kill tumours directly, and others that cut off their ability to become resistant to chemotherapy drugs.

This ‘Dragon’s Den’-like way of funding research hands out up to £200,000 to people with revolutionary ideas that have the potential to be game-changing for cancer research.”

Professor Dyson added that the success of the research so far was due to the efforts of a wide team of researchers and partners:

“This project is very much a team effort.  Here at Swansea University my colleagues Dr Claire Morgan and Dr Laura Morris have contributed hugely to the project.

The £8000 raised by Robert Taylor, who was himself treated for prostate cancer, was essential in getting this first phase of research under way, alongside funding from the Welsh Government.  Our collaborating consultants Pradeep Bose and Neil Fenn, who administer the Swansea Prostate Cancer Fund, have been enormously supportive of the project.

The work of our Cardiff University colleague Alan Clarke was also vital.   His role was to help design how to progress the research into this new therapy to the next stage.   We recently heard the sad news that Alan had passed away suddenly.  His contribution will be central in our research as it moves forward; and any success we have in developing new better treatments for cancer will be part of his legacy."