A new Swansea University project is to explore and celebrate the history of Longfields in Swansea. The organisation was set up in 1952 by parents of children with cerebral palsy who campaigned for their children to have an education. This led to the first school in Wales of this kind being opened in April 1953.

Initially based in Uplands, the school then moved to new premises in West Cross in 1955.   Originally it was called Swansea and District Spastic Association, though the name was later changed to Longfields, after the house in which the charity was based.

As well as offering education for these children, Longfields also provided job opportunities to some of its former pupils with the Work-Centre in 1962 and then the Occupational Therapy Unit which opened in December 1967.  In later years it became a day centre.

Swansea-born actress Catherine Zeta Jones was a patron of the centre, and visited it with her husband Michael Douglas in 2005.  Following a merger with another charity, the centre closed in 2011, after almost six decades in operation. 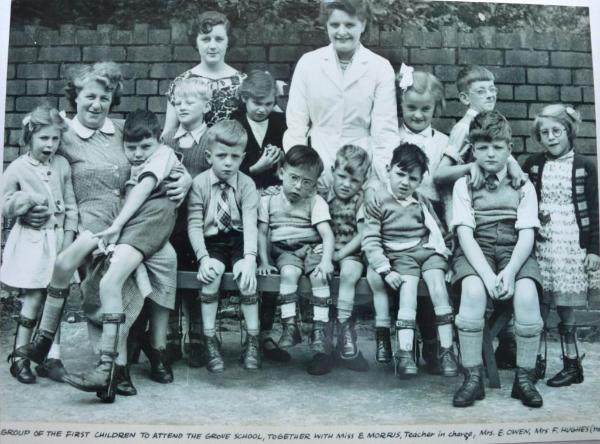 Pictures:  A group of the first children to attend the school, when it was in The Grove, Uplands, before moving to West Cross.

The new Swansea University project, which is led by Dr Rebecca Clifford and supported by the Heritage Lottery Fund, will highlight the efforts of the founders of Longfields Association, and explain its impact on the lives of people who studied and worked there.

The historians involved in the project will also be assessing the wider significance of Longfields, which played an important role in the social history of Swansea and in the wider disability movement. It developed innovative approaches in providing services for disabled people, against a backdrop of changing social attitudes towards disability.

Find out more about the Longfields project

Memories of local people who had any connection to Longfields along with individuals who were part of Longfields will be central to the research.  Historians will be seeking out individuals who attended the school or the Centre, staff, carers and parents so that they can gather, record and share their memories.

Teresa Hillier, who formerly worked at Longfields, and who is now carrying out key research for the Swansea University project, said:

"This project gives us the chance to tell the story of Longfields and the significant impact it had on the lives of those who attended the Centre.  It is also part of the social history of Swansea.

The parents put in such hard work to set it up, to get an education for their children.  It made a big difference to so many people’s lives, and established long-standing links with other organisations among the community."

Teresa explained how historians will be drawing on people’s memories of Longfields:

We’ll be organising local events for people to come along, find out more or participate in some of our activities." 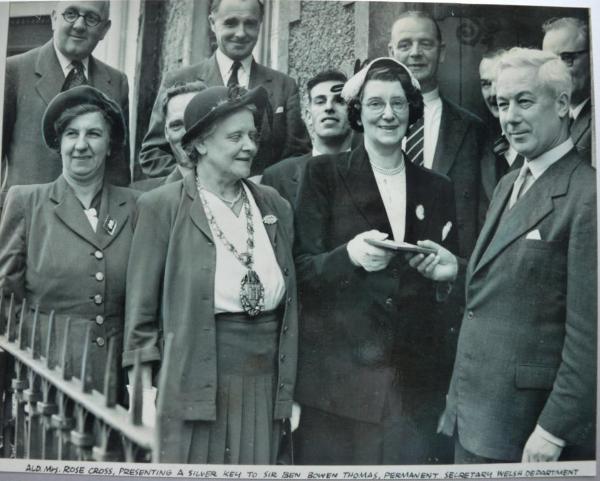 Picture:   Mrs Rose Cross, Mayor of Swansea, presenting a silver key to Welsh permanent secretary Ben Bowen Thomas to mark the opening of the school at The Grove, 1952

The memories and materials gathered by the researchers will be translated into an interactive sensory exhibition at Swansea’s Waterfront Museum in May 2018.  The information gathered during the project will form an online archive.

Richard Bellamy, Head of the Heritage Lottery Fund in Wales, which is supporting the project, said:

‌"So much of our local history is woven into people’s reminiscences and experiences.

The Longfields project will capture these elements of our shared history that is in danger of disappearing as it slips out of human memory.

Thanks to National Lottery players, HLF is able to support such projects that conserve the contribution made by all parts our community to the shared heritage of Wales."

The Longfields project will form part of the Connected Communities Programme that researches and celebrates the history of communities across the Swansea Valley, and has been developed by Teresa Hillier and Kate Spiller at the Research Institute for Arts and Humanities (RIAH) and the history department at Swansea University.