Revealing working manuscripts of poems by Dylan Thomas have been bought by Swansea University and will go on public show for the first time on International Dylan Thomas Day – Saturday May 14th.

The University bought the papers, showing drafts of the poems Unluckily for a Death and Into her Lying Down Head, at a recent auction in Sotheby’s, New York. They will be housed in the University’s Richard Burton Archives, which is already home to a previously “lost” Dylan Thomas notebook.

The latest collection of manuscripts will be on public display for the first time on International Dylan Thomas Day, May 14th.

The exhibition, which is free and open to all, will be from 11am to 3pm on May 14th, at the Bay Library on Swansea University’s stunning new Bay Campus. 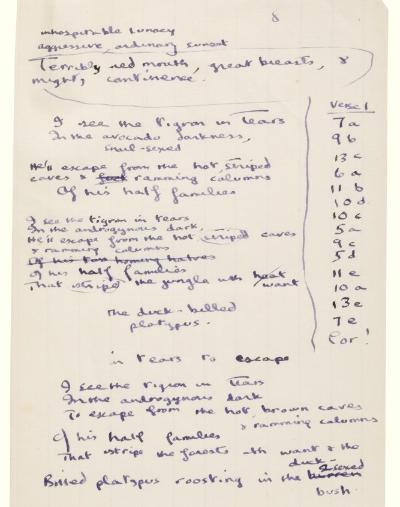 They show the poet revising imagery and word choice, and working out rhythmic structures, even including diagrams of his tentative rhyme scheme and small drawings where he appears to be visualising his imagery.

Dylan wrote about both poems in his Letters to Vernon Watkins in which he also sent an early draft of each poem.

Of 'Unluckily for a Death', Dylan writes:

"Here's my new poem. I hope you'll think it's good; I'm extremely pleased with it at the moment - it was written in a very enjoyable mood (or any other better word) of surly but optimistic passion..."

He describes 'Into her Lying Down Head' as a real labour of love: "I’ve never worked harder on anything, maybe too hard: I made such a difficult shape, too."

Both poems were later published in his seminal collection Deaths and Entrances (1946).

In 2014, Swansea University purchased a Dylan Thomas notebook - which had lain forgotten in a drawer for decades before coming to light – in order to ensure that it was returned to Wales and was accessible to scholars and the community. The latest purchase of these manuscripts marks another return journey of Dylan's papers, this time from New York to Wales.

Hannah Ellis, granddaughter of Dylan Thomas,pictured with the notebook at Swansea University, said:

"It is wonderful that Swansea University are putting so much energy and effort into new ways to study and research Dylan Thomas.

Having these manuscripts in Britain, along with the notebook they acquired in 2014, will help people to see the meticulous craft that my grandfather put into his work, and allow them to understand that he was a significant twentieth-century writer."

“It was a major coup for Swansea University to acquire the Dylan Thomas ‘lost’ poetry notebook towards the end of Dylan’s centenary year in 2014, and now little over a year later they have secured another hugely significant group of manuscript drafts for two major and important poems dating from the early forties when Dylan was getting deep into his poetic stride.

These papers reveal intimate and detailed records of the poet’s creative process and will be invaluable to future generations of students and academics." 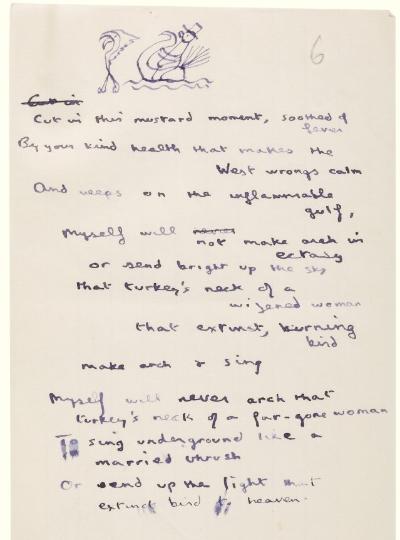 Professor John Spurr, Head of the College of Arts and Humanities at Swansea University, said:

“These manuscripts offer a fascinating insight into the craft of one of our greatest 20th poets, and it is fitting that they will be kept in Dylan’s home town, and be accessible to scholars and the general public. They will be a wonderful addition to our already extensive archive collection."

The manuscripts will be kept in the University’s Richard Burton Archives, which already house the Dylan Thomas notebook, as well as Burton’s diaries and other papers, bequeathed to the University by his widow Sally.

They also hold other important items including the papers of academic and writer Raymond Williams, and the South Wales Coalfield Collection. The archives are open to all by appointment.

‌Pictures:  Manuscripts for “Unluckily for a Death”, showing the poet's rhyme schemes and drawings visualising his ideas