Homeless people in Swansea have been given health checks and a selection of gifts that could make a world of difference to them this winter. 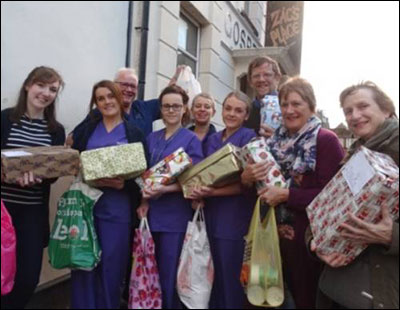 Philippa Warren, Fiona Leahy, Amy Rolinson and Lisa Stephens, who are all studying nursing at the College, took part in the event.

Homeless and vulnerably housed people had the chance of a health check and seasonal immunisations to protect them during the cold weather.

The health day was held in Zac’s Place in George Street, which provides a daily breakfast service and weekly coffee evening for homeless people.

ABMU podiatrists provided foot checks and care, while the homeless people present could have a dental examination, and get advice on brushing and prevention and management of tooth decay and gum disease. 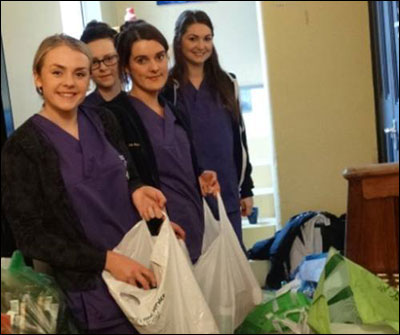 Meanwhile, staff from SANDS Cymru and WCADA (Welsh Centre for Action on Dependency and Alcohol) were on hand to provide drug and alcohol advice.

Janet Keauffling said: “The homeless people we saw had significant health needs. Most had multiple risk factors for mortality and morbidity.

“A number of people were found to require referral or follow-up care for conditions identified on the day.

“These conditions might not otherwise have been identified or diagnosis might have been significantly delayed had they not attended.”

Every person examined was given a free health pack including toiletries, toothbrushes, toothpaste, tissues, hand gel and socks.

They also received some of the donations from ABMU staff to Pat and Janet’s Winter Homeless Appeal. The rest was distributed to homeless and vulnerably housed people in Swansea by The Wallich charity.

Student Nurse Lisa Stephens said: “The day consisted of directing the homeless people around the different stations whilst engaging with them in a non-judgemental manner.

“We made Christmas goodie bags for them, which consisted of food donations from the public and we also gave out shoeboxes wrapped up like Christmas presents that contained items such as warm scarves and gloves, notepads, chocolate and soap etc.

“It was a real eye opener of the social problems that exist for people that are less fortunate and I would advise all students to try and get a day doing this as it is very beneficial.”

Amy Rolinson, who studies Child Nursing, said: "I am so thankful that I was invited to help on the homeless health day, I will never forget this experience and I would love to be able to help again, it is most rewarding placement I have had the opportunity to participate in.

“I didn't even know that Jan's role existed until the day I walked in, the job she does is unbelievable."