A new “zero emissions” fleet of five electric vehicles is helping Swansea University to improve air quality in the city, save money, and reduce carbon emissions, which have already been cut by 4.5 tonnes.

The vehicles – cars, vans and people-carriers – are used by different branches of the University, such as Information Services and Systems, the College of Engineering, the student letting service (SAS), and the SPECIFIC project. Two more vehicles are due to arrive shortly, boosting the fleet to seven.

All the vehicles in the fleet were lined up together for the first time at the Great Hall on the University’s new Bay Campus, for an event on smart technologies which was held on the campus, and organised by Low Carbon Swansea. 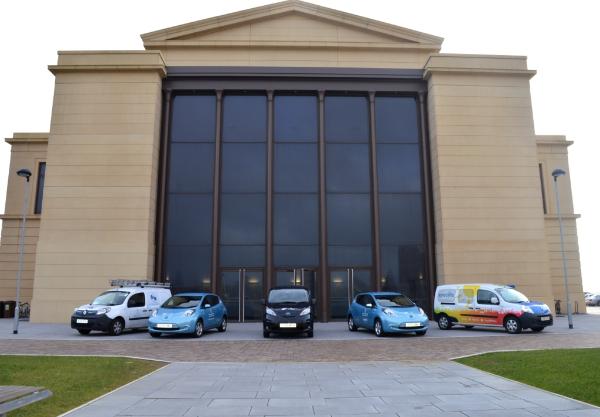 Picture:  the University's fleet of electric vehicles at the Great Hall on the Bay Campus - two more vehicles will be added shortly

Between them the five vehicles have:

More pictures of the zero emissions fleet on display

Nigel Morris from the information services and systems team at Swansea University said:

“The new fleet has been a big success, cutting our carbon emissions by 4.5 metric tons already.  The vehicles don’t damage air quality either, as they don’t produce the gases that are generated by diesel engines in particular.

With the financial savings too, they’re proving to be an all-round winner, which is why we already have two more cars on order for January.” 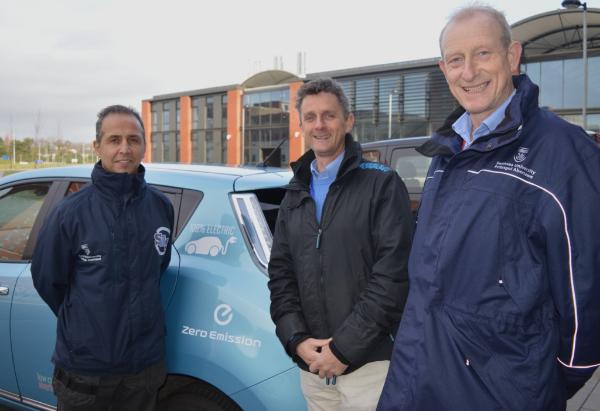 Picture:  One of the new zero-emissions vehicles: pictured are (l-r) Carl Palla of SAS Student Lettings, where manager Steve Daniels was one of the first to commit to using the new vehicles; with Miles Willis of the College of Engineering, and Nigel Morris of Information Services and Systems.

Miles Willis, Project Director of the College of Engineering Bay Campus Team, who has been using one of the electric cars, said:

“They’re very nice to drive and just like normal cars.  It’s useful for going between campuses, especially when I need to carry extras with me.   They charge up in about 90 minutes, so I can leave it charging while I’m in a meeting.

They’ve also been great advertising for Swansea Uni as they’ve attracted a lot of interest.”

Heidi Smith from the University’s Sustainability Team, who spoke at the Low Carbon event taking place on the Bay Campus, explained that the zero emissions fleet is part of the University’s wider commitment to reducing its environmental footprint.

“The event looked at new ways of making Swansea a lower-carbon city.  It was a chance to learn from best practice and get ideas from partner organisations in the city, such as the Council and the Waterfront Museum.

The electric vehicle fleet is one of the ways in which we’re showing our commitment to sustainability, but there are other examples too.

Our new engineering quarter at the Bay Campus is powered by solar panels.  We’ve just retained our certificate for our environmental management system – ISO14001.  We’re taking on responsibility for managing Crymlyn Burrows Site of Special Scientific Interest next to the Bay Campus.  And we recently had a very successful “switch-off” evening with staff and student volunteers to remind our staff about saving energy.  It all shows that Swansea University is serious about sustainability.”

Find out more about the University's sustainability work