Staff at Swansea University’s Taliesin Arts Centre are celebrating the success of last year’s Under Milk Wood: an opera with nominations from two prestigious awards events.

The new opera, which was commissioned by the centre to commemorate Dylan Thomas’ centenary, is nominated for the World Premiere award at the International Opera Awards and for Best Opera Production and Best Design/Costume at the Wales Theatre Awards. 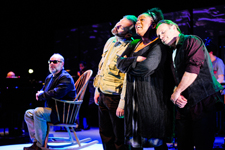 The piece by Swansea born composer John Metcalf was developed and produced by Taliesin, in partnership with New York’s Companion Star and Montreal’s Le Chien Qui Chante with support from Welsh National Opera. The work featured an international cast and premiered to excellent reviews at the university-based arts centre last April before touring around Wales and receiving a CD release by Cardiff based Ty Cerdd Records.

“Under Milk Wood: an opera has been a real labour of love for all involved, not just the cast and creative team but also for the team here at Taliesin who worked on everything from fundraising and casting to marketing and set production. We spent six years bringing the project to the stage, so to be nominated in categories that pitch us against companies such as English National Opera and Houston Grand Opera is just thrilling”.

The audio recording will receive its US release on St David’s Day, supported by Wales Arts International. Winners of the international Opera Awards will be announced at a gala evening at the Savoy Theatre in London on 26th April. The Wales Theatre Awards will be presented at Sherman Cymru in Cardiff on 31st January.