More than 600 members of the local community visited to explore the new £450m Bay Campus development, which formally opened on September 21, and to find out more about the work of University as a whole.

Visitors were given guided tours of the facilities and a talk about the University and its history by the Vice-Chancellor, Professor Richard B Davies.  There was also a talk on the Site of Special Scientific Interest (SSSI) by Dr Dan Forman, who leads the Swansea Ecology Research Team (SERT), in the Department of Biosciences, College of Science, followed by a walking tour of the SSSI.

The College of Engineering’s Engineering Fair gave visitors an insight into the University’s areas of research and study and a chance for visitors to try out the Merlin Flight Simulator and the Formula Student car designed by students each year to compete in the annual inter-University championships.

And for one young visitor, the experience definitely had a positive impact. 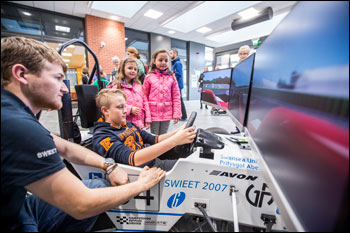 Marcus Watts, aged 11, from Morriston, said: "It was my first time visiting Swansea University; I've never been to a University before.  I loved driving the Student Formula car and the information about Engineering.

“I've already told my parents that I want to be an engineer – it’s just deciding which one!"

There were also activities for younger visitors including Goo Making and a Treasure Trail, where they had to collect interesting facts about the Bay Campus to win a small prize.

A gallery of images from the Undergraduate Open Day, which also took place on Saturday, October 10, and the Bay Campus public open afternoon.