New research from Swansea University has revealed that individual differences in physiology are linked to risk-taking behaviour in marine shore crabs.

Dr Ines Fürtbauer of the University’s Department of Biosciences, College of Science, examined the link between physiology and behaviour in marine shore crabs, and her paper is published in the Royal Society journal Royal Society Open Science today (Wednesday, June 10). 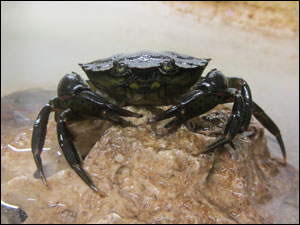 It is now well acknowledged that personality is not unique to humans.  Fish, birds, mammals, insects and other invertebrates display different personalities, i.e. they vary consistently in their behavioural responses (e.g. they are bold or shy).

In vertebrates, animal personalities are often underpinned by consistent individual differences in physiological traits (“coping styles”).  Whether this is true also for invertebrates is unclear.  The aim of the research was to tackle this question in a marine invertebrate, the shore crab.

Dr Fürtbauer assessed the personalities of 53 crabs by tracking their behaviour in a novel environment.

She also repeatedly measured the crabs’ haemolymph density, an indirect measure of blood protein concentrations that are indicative of physiological condition in crustaceans, and found striking individual consistency in this trait.

Furthermore, the study revealed a relationship between this physiological measure and the crabs’ risk propensity, i.e. how much they hide.

“This offers exciting potential for future comparative studies which could unravel evolutionary pathways to phenotypic differences.”