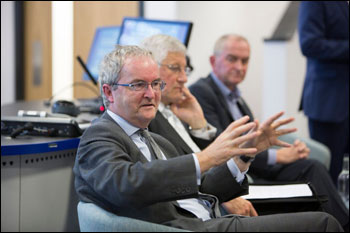 Professor Richard B Davies, the University’s Vice-Chancellor and Professor Marc Clement, Acting Head of the School of Management, welcomed Mr Taylor to the new facilities to view the results of the £60m funding the EIB granted the University in 2012 for its ambitious campus development programme – the first EIB investment in Wales.

Jonathan Taylor, Vice-President of the European Investment Bank, said: “In fewer than three years Swansea University has transformed a brown field site into a world-class academic centre of excellence now thriving with students.

“Swansea’s ambition has succeeded in creating a model for universities across Europe to follow and has unlocked new cutting edge research with leading companies.

“The European Investment Bank is pleased to have provided GBP 60 million for this flagship education investment, as part of our commitment to support crucial investment across Wales.”

Professor Richard B Davies said: “Swansea University’s campus development programme is the largest university-led knowledge economy project in the UK and is now considered as one of the best examples in Europe.

“This transformational project for the University would not have been possible without funding support from the EIB.  Their endorsement after months of due diligence gave the other funders the confidence that Swansea had the academic strengths, effective partnerships with industry, and management competence to deliver the massive Bay Campus and use it as a powerhouse for the economy, regionally and nationally.

“I was extremely proud to be able to show Mr Taylor the positive outcome the EIB’s confidence and investment in Swansea University, as we welcomed him to the School of Management.” 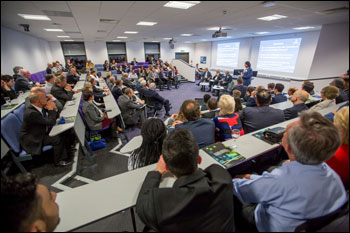 Professor Marc Clement, Acting Head of the School of Management, added: “This has been an exciting project for Swansea and for Wales, and I am full of admiration for what the University and my School of Management colleagues have achieved, with the support of partners such as the EIB.

“We were delighted Jonathan Taylor agreed to give an inaugural lecture during his visit to the School of Management, where he spoke to a 150-strong audience, which included local business, on the theme of ‘Investment Impact and Innovation’.

“This was followed by a Q&A session, of which some focused on the challenges of innovation for the Swansea Bay area. What is clearly apparent is the need to maximise the momentum gained from the investment into the Bay Campus.

“This is something I and the School of Management look forward to working with business on, ensuring there is a rich environment within which quality research can thrive, and attracting further investment into the south west region of Wales to help drive forward the knowledge economy.”

A Flickr gallery of images from the inaugural lecture by can be viewed here.