After two years of intense maintenance and upgrade and several months of preparation for restart, the world’s most powerful particle accelerator is back in operation at CERN – the European Organisation for Nuclear Research in Geneva, Switzerland.

CERN reports that for the first time since 2013, on Sunday, April 5, at 10.41am local time, a proton beam was back in the £3.74bn, 27km-circumference Large Hadron Collider (LHC), which lies beneath the French-Swiss border.  This was followed at 12.27pm local time by a second beam rotating in the opposite direction.

Relatively low energy beams of protons of 450 gigaelectron volts (GeV) were circulated on the LHC’s restart and over the coming days, operators will check all systems before increasing the energy of the beams.

Actual particle collisions, marking the start of a new phase of LHC experiments, will not begin until at least May or June.

But the technical stop and upgrade of the LHC – described as “a Herculean task” – means they will take place with nearly double the energy the LHC reached during its first run operating at seven teraelectron volts (TeV), and boosting the energy of the collider to the full design energy of 13 TeV.

"Operating accelerators for the benefit of the physics community is what CERN’s here for,” said CERN Director General Rolf Heuer, speaking on Sunday.

"Today, CERN’s heart beats once more to the rhythm of the LHC.” 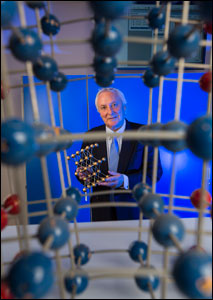 Swansea University’s Department of Physics, in the College of Science, is proud of its long-standing history of collaboration with CERN since the 1950s/60s and the LHC project.

Professor Evans graduated from Swansea University with a first class degree in Physics in 1966 and his PhD in 1970. He was made an Honorary Fellow of the University in 2002.  As Project Leader of the LHC, he was at the centre of operations during the construction and commissioning stage, through to the LHC’s start-up on September 10, 2008.

Dr Rhodri Jones, another Swansea physicist who has worked at CERN since graduating, is now head of the CERN Beam Instrumentation Group and designed the instrumentation for the LHC.

The first particle collisions took place in March 2010, and in July 2012 came the announcement from CERN of the discovery of the elusive Higgs boson, an elementary particle that gives other particles mass, and which the LHC was built to find. 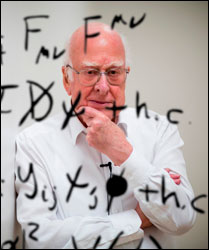 Professor Peter Higgs (pictured), who theorised the Higgs boson, has close links with Swansea University’s Department of Physics and became an Honorary Fellow of the University in 2008.

And a large number of current Swansea Physics academics and postgraduate students work closely with CERN through projects such as the ALPHA experiment, an international collaboration whose aim is stable trapping of antihydrogen atoms, the antimatter counterpart of the simplest atom, hydrogen.

The Higgs boson was the final piece of what is known as the Standard Model of particle physics – a series of equations that describe how all the known particles interact with one another.

With the restart of the upgraded collider, the LHC experiments will soon be exploring uncharted territory. Physicists will be putting the Standard Model to its most stringent test yet, searching for “new physics” beyond this well-established theory describing particles and their interactions.

Scientists at CERN hope to discover “new physics” beyond the Standard Model, with the Brout-Englert-Higgs mechanism, dark matter, antimatter and quark-gluon plasma on the research menu for the LHC’s second phase.

Chris Allton, Professor of Theoretical Physics in Swansea’s Department of Physics, said: “I’m very excited to see what this next phase of the LHC brings us. The first phase found the Higgs, the last particle of our Standard Model to be discovered.

“This new phase, with almost twice as much energy could uncover particles which help us understand dark matter or supersymmetry, or, who knows?"

Professor Niels Madsen, also of Swansea’s Department of Physics, is co-founder and group leader in the ALPHA collaboration, and was working at CERN in Geneva on the day the LHC was restarted. He said: “It is an exciting time in physics with an increasing number of unresolved issues, and I'm eager to see if the second phase of the LHC, with more energy and more collisions, will be able to start shedding some light on this darkness."