‌Professor Shareen Doak (left) and Dr George Johnson (below) joined an array of up and coming young researchers from around the world who contributed to the journal, showcasing the strength of research being carried out by tomorrow’s leaders in the field of toxicology.

The papers link with the high impact research submitted by Swansea University Medical School as part of the Research Excellence Framework (REF) 2014, which found that low level genotoxic exposures do not always pose significant risks to DNA. This breakthrough has led to a worldwide paradigm shift in relation to genotoxin exposures ensuring peace of mind to patients to which genotoxic drugs are administered.

Dr Johnson became Associate Professor in Swansea’s Medical School in 2013. He has led numerous collaborations with major government regulatory and industrial bodies, and has become a steering member for the ‘International Life Science Institute Health and Environmental Institute Genetic Toxicology Technical Committee’ (ILSI-HESI GTTC). In 2014 he was presented with the European Environmental Mutagen Society young scientist award, and continues to grow his expertise in developing in vitro and in vivo genetic toxicity test systems as well as statistical modelling techniques for use in human health risk assessments.

Professor Doak has recently been appointed as Personal Chair in Swansea University Medical School where she is Director of the Centre for NanoHealth; leads the Nano(geno)toxicology Research program; co-leads the In Vitro Toxicology Group and leads prostate cancer research programs within the Cancer Biomarkers Group. Shareen sits on the UK Government Committee on Mutagenicity (COM), is a member of the International Genetic Toxicology Technical Committee (GTTC), and is an external expert for the EU Scientific Committee on Consumer Safety (SCCS Working Group on Nanomaterials in Cosmetics).‌

‌Professor Doak was selected from all contributors to the issue by the journal Editor to provide the front cover art for their New Talents issue of Toxicology Research. The striking image provided exemplifies the research contained therein. 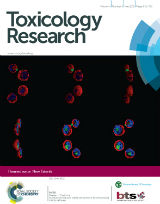 ‌Abstracts of the two papers ‘Quantum dot induced cellular perturbations involving varying toxicity pathways’ and ‘New Approaches to Advance the use of Genetic Toxicology Analyses for Human Health Risk Assessment and Regulatory Decision-Making’ can be accessed through the latest edition of Toxicology Research.

Established in 2004, Swansea University Medical School is an internationally-recognised centre of excellence in medical research, education and innovation. The Medical School has three main activities: learning and teaching, research, and business and innovation. From the creation of the Graduate Entry Medicine (GEM) programme in 2004, opening of the Institute of Life Science phase one (ILS1) in 2007 and phase two (ILS2) and the Centre for NanoHealth in 2011, to earning the right to award Primary Medical Qualifications (PMQ) independent of any other institution in 2014. Find out more about the history of the Medical School here.

Swansea University Medical School has had spectacular success in the Research Excellence Framework (REF) 2014. Achievements include; joint 1st in the UK for research environment rated as 100% world-leading, 2nd in the UK on research quality in our unit of assessment, scored 100% world-leading in terms of impact and 95 % of the research submitted was assessed as world-leading (54%) or internationally excellent (41%) Find out more about the REF2014 results of the College of Medicine here.