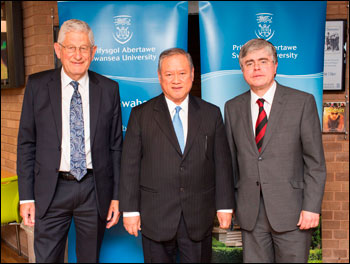 The Honourable Pehin Dato Lim Jock Seng delivered the lecture at Swansea University’s Taliesin Theatre on the evening of Monday, June 29, on the theme of Enhancing ASEAN-UK Relations: Forging closer ties between Brunei Darussalam and Swansea in a globalised world.

Professor Richard B Davies, Swansea University’s Vice-Chancellor, said: “We were delighted to welcome back one of our most distinguished international alumni, The Honourable Pehin Dato Lim Jock Seng, to give what was a most interesting and thought-provoking James Callaghan Memorial Lecture.

‌“I am confident this year’s lecture will have resonated across a University which, as well as having a strong and clear vision for delivering world-leading research, innovation and education, also delivers an outstanding student experience, with teaching of the highest quality, producing graduates equipped for distinguished personal and professional achievement. 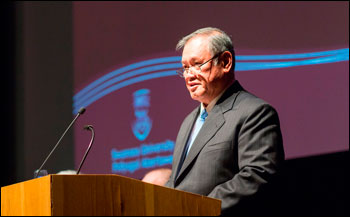 “There are exciting opportunities ahead for Swansea University, as we prepare to enter a new era with the opening of our science and innovation Bay Campus this September.

“Swansea University is a global university, pursuing an ambitious internationalisation strategy. As we move forward, we look forward to forging even closer ties with Brunei Darussalam and our growing number of international partners, who are critical to our continued success and to providing further exciting opportunities to benefit research and innovation, and our staff and students.” 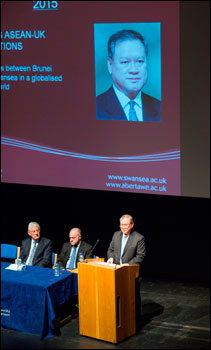 He was then appointed as Brunei Darussalam’s High Commissioner for New Zealand in February 1986.

For his services, he was conferred the title of Pehin Menteri and Dato Seri Setia, as well as other meritorious awards by His Majesty.  He was appointed as the Second Minister of Foreign Affairs and Trade in May 2005.

In October 1996, Lord Callaghan returned to Swansea University to open the campus building named in his honour.  The building fittingly reflects Lord Callaghan's working life, as it houses (amongst others) the departments of Politics and International Relations, and History.