Research by international Dylan Thomas expert Professor John Goodby, of Swansea University’s Department of English Language and Literature, has been chosen to feature in '10 Years of the AHRC: A Decade of Supporting Excellence in Arts and Humanities Research', recently published to celebrate the AHRC’s tenth anniversary. 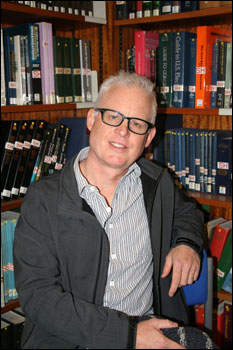 The publication, which is also published online, carries a two-page feature on Professor Goodby’s work in publicising Dylan Thomas during his centenary year, 2014, and on his new centenary edition of the Collected Poems of Dylan Thomas, written with the help of an AHRC Fellowship.

Professor Goodby’s work has been selected as one of only 38 AHRC-supported projects showcased in 10 Years of the AHRC, from 6,901 awards made to researchers during that period.

The feature highlights not only Professor Goodby’s publications, which also include The Poetry of Dylan Thomas: Under the Spelling Wall (2013), but also his work as the lead on an AHRC panel which advised BBC Wales on programming around the Dylan Thomas centenary.

‌Professor Goodby acted as the BBC’s consultant on numerous projects throughout 2014, including contributing to three TV films and numerous radio broadcasts, helping the BBC to reach out to new audiences, with programmes about Dylan Thomas broadcast on Radio 6 Music, as well as on Radios 3 and 4.

‌The AHRC publication also reports that one of the highlights of the Dylan Thomas centenary year for Professor Goodby was the discovery of a lost Dylan Thomas notebook, dating from 1934-1935. The notebook was subsequently bought by Swansea University at auction by Sotheby’s in December 2014, and now resides in the University’s Richard Burton Archives.

Professor Goodby said: “I’m honoured that my research and writing on Dylan Thomas, supported by the AHRC, has been recognised and featured in their prestigious anniversary publication. It’s an acknowledgement of the fact that it is possible to put across the significance of Dylan Thomas’s poetry to a wide audience without dumbing it down, or reducing it to the poet’s bohemian reputation, as so often happens.

“The paperback edition of the Collected Poems is due to appear in May 2016, and will include a rediscovered poem, and a US edition will be appearing later in the year. In addition, thanks to the College of Arts and Humanities funding of a PhD student, a facsimile of the notebook is being prepared for publication, and I have recently been approached by a publisher to write a new biography of Dylan Thomas.

“The Dylan Thomas Project, which I direct, is also aiming to develop a website featuring work on Dylan Thomas and an archive of innovative poetry. Hopefully some of these future projects will attract AHRC support and we will be able to continue our partnership into the future.”

To view the full feature (pages 87-88), please click here, and for further information on the AHRC’s tenth anniversary click here.