‘Gofalu Trwy’r Gymraeg’ (Caring through Welsh), an innovative app created by Swansea University, has scooped the IT and the Welsh Language award in the Welsh Government‘s Welsh Language in Health, Social Services and Social Care Awards 2014.

The award, which carries a £1,000 prize, was presented at the Words into Action Conference on 19 June, at the Wales Millennium Centre, Cardiff Bay.

Initially funded by the Coleg Cymraeg Cenedlathol’s grants scheme, the app includes helpful healthcare-related words, terms and phrases. Its aim is to support and enable individuals working in the healthcare sector to use Welsh with patients, thus ensuring that Welsh-speaking patients can discuss their conditions using their preferred language.

‌The app was based on a booklet created by Angharad Jones, Senior Lecturer at Swansea University’s College of Human and Health Sciences. The forty page booklet was given to the college’s students in 2011, with the aim of encouraging them to practice their Welsh in order to be able to offer a first class service to the public. By turning the booklet is an interactive learning tool, this handy resource is now available for everyone to use as needed, and following additional funding from the Coleg Cymraeg Cenedlaethol, the app was recently developed to support both Apple and Android mobile devices.

Dr Dafydd Trystan, Registrar of the Coleg Cymraeg Cenedlaethol said: ''I would like to congratulate everyone involved in creating this innovative app in Swansea University.

“The Coleg Cymraeg Cenedlaethol believes that the development of the Welsh language in new technology is absolutely critical to the long term prosperity of the language and we are pleased to collaborate with Universities to ensure progressive development that supports the work of students in our universities and health in the workplace. We look forward to seeing further developments similar to this in the future”.

‌‘Gofalu trwy’r Gymraeg’ was nominated for the award by Dr Gwenno Ffrancon, Director of Swansea’s Academi Hywel Teifi, and following the awards ceremony, Dr Ffrancon, said: “I’m very pleased that 'Gofalu trwy'r Gymraeg' has won the IT and Welsh prize in the Words into Action awards, especially as this is the first time the award has been granted. 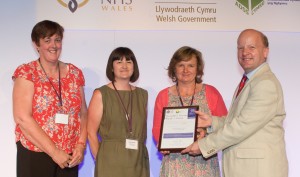 “It's good to see that great partnerships and a creative and innovative response to the challenge of supporting health sector workers with their language skills have been recognised in this way. The Academi and its partners have already begun on a series of similar projects, and receiving this award is an incentive for us to experiment and innovate further”.

Professor Iwan Davies, Pro-vice-chancellor at Swansea University, said: ''Swansea University is delighted that the work of Academi Hywel Teifi and its partners has been commended by this award. The app has proven extremely successful, and we look forward to developing similar projects in the near future”.

‘Gofalu Trwy’r Gymraeg’ is free to download from Google Play for Android devices, or from iTunes for Apple devices.