A joint Swansea-Texas research team has discovered a more environmentally friendly carbon-capture method that could help in the drive to reduce the impact of greenhouse gases, by drawing carbon dioxide emissions from industrial flue gases and natural gas wells.

Their study showed that amine-rich compounds are highly effective at targeting and capturing the greenhouse gas, when they are combined with the soccer-ball shaped carbon-60 molecules, also known as Buckyballs.

The research is the subject of an open-access paper published in the "Nature" online journal, Scientific Reports. 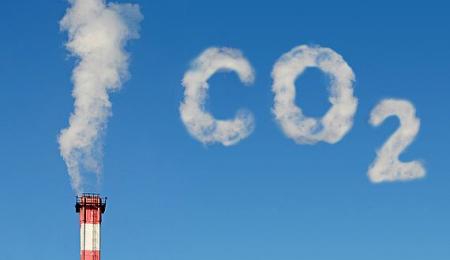 Lead author Dr Enrico Andreoli is a senior lecturer in the College of Engineering at Swansea University.

Corresponding author and head of the project, Professor Andrew Barron, is Ser Cymru Chair of Engineering at Swansea, and Welch Chair of Chemistry and a professor of materials science and nanoengineering at Rice University in Texas.

Both work as part of Swansea’s new Energy Safety Research Institute, set up to investigate how to improve new and existing energy sources.

The research, which was partly funded by the Welsh Government’s Ser Cymru programme, is another example of Swansea’s growing strategic partnership with top universities in Texas. 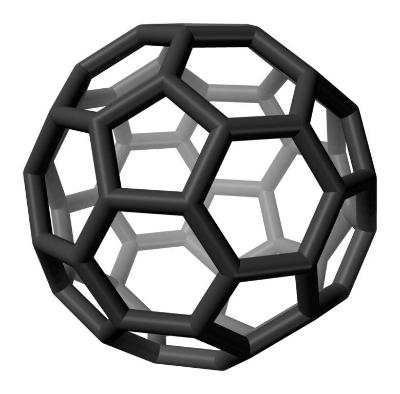 The “buckyball” molecule (“buckminsterfullerene”)  - pictured - was discovered at Rice in 1985.  Their curvature means they are very effective at binding the amine molecules that capture carbon dioxide.  Crucially, they do not capture methane at the same time, which is a drawback of other methods.

The team used buckyballs as crosslinkers between amines, nitrogen-based molecules drawn from polyethyleneimine.   They produced a brown, spongy material in which hydrophobic (water-avoiding) buckyballs forced the hydrophilic (water-seeking) amines to the outside, where passing carbon dioxide could bind to the exposed nitrogen.

‌When the team began combining carbons and amines several years ago, they noticed an interesting progression: flat graphene absorbed carbon dioxide well, multiwalled nanotubes absorbed it better, and thinner single-walled nanotubes even better.  That suggested the curvature was important:  C-60, being a sphere, has the highest possible curvature among carbon materials.

“Our material has the potential to clean flue gases and natural gas, and protect the environment from the harm of carbon dioxide emissions.

Cross-linking amine-rich polymers to make advanced carbon dioxide absorbents is really a new way of thinking. We have done it, and we hope other scientists will follow our lead.

Cleaner energy and a safer environment are fundamental commitments of the Energy Safety Research Institute here in Swansea.”

"We had two goals.  One was to make the compound 100 percent selective between carbon dioxide and methane at any pressure and temperature. The other was to reduce the high temperature needed by other amine solutions to get the carbon dioxide back out again. We've been successful on both counts." 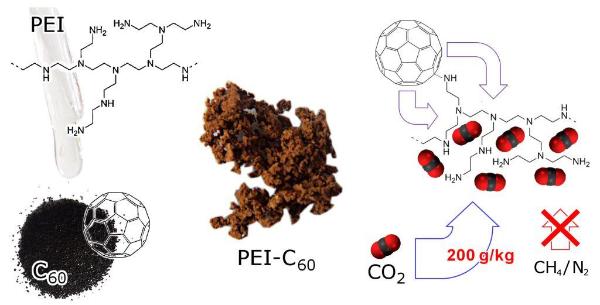 Picture: the science behind the new method:

1.    (Left/centre):  The amine-rich compound and the C-60 molecules (left) combine to make the brown spongy material (centre).  The C-60 molecules, which repel water, force the amines, which are water-seeking, to the outside of the material.

2.    (Right):  The amines are then in a good position to attract passing carbon dioxide (CO2) molecules.   1 kg of the material can absorb 200g of CO2.   Crucially, it only attracts CO2, unlike other carbon capture methods, which also capture methane (CH4) and nitrogen gas (N2).  This makes the material far more efficient at absorbing CO2.