Professor Matt Jones of Swansea University is among the 21 recipients in the latest round of prestigious Wolfson Research Merit Awards, which were announced today (Friday, January 31) by The Royal Society, the UK’s national academy of science. 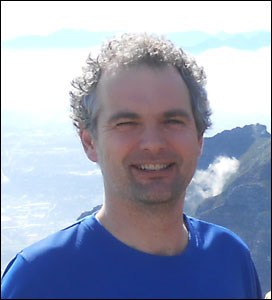 The awards, which are jointly funded by the Wolfson Foundation and the Department for Business, Innovation and Skills (BIS), provide universities with additional support to enable them to attract science talent from overseas and retain respected UK scientists of outstanding achievement and potential.

Professor Jones, Head of the Department of Computer Science in the University’s College of Science, has been given the award as a platform for work motivated by his desire to understand and solve a series of complex human-technology problems of great interest to the international research community and with the aim of improving life for many hundreds of millions of people in the developing world.

Outlining the background to the five-year project, which is called ‘Information interaction for "bottom of the pyramid" users in developing regions’, Professor Jones said: “Hundreds of millions of people – in regions like India, China and South America – are getting their first taste of computing and information interaction through mobile devices. Much has been written about how empowering these devices will be for these communities, providing access to education, banking, healthcare and more.

“However, there is a problem with this vision. Most mobiles are designed with a ‘first world’ perspective: for people who are relatively affluent with already good access to resources like education and infrastructure such as grid power and pervasive Internet connectivity.

“My work addresses the situation of people who have been described as being ‘at the bottom of the pyramid’.”

Professor Jones explains these groups of people have lower levels of literacy, making it difficult for them to use written information on touch screens, for instance. They often have very limited data bandwidth or connections that are routinely unavailable. And they do not have grid electricity or have long periods of the day when the power is turned off.

As a human-computer interaction researcher, Professor Jones’ passion has always been to explore how computer technologies can fit into people’s lives effectively.

Through a number of recent projects in places like rural Africa and rural India, his team has learnt a lot about the way life is lived in worlds very different to ours.

Using his experiences to date, Professor Jones is now embarking on this ambitious project, which will develop and test a range of innovative devices, user interfaces and computer algorithms with the aim of transforming how such communities create, access and share information through mobile devices.

Professor Jones, who works within the University’s Future Interaction Technologies Laboratory – known as the FIT Lab – added: “In research, timing is always vital and this is the right moment to embark on the agenda we propose.

“Presently, most people in the regions we are focusing on still have low-end – not “smart” – phones.  However, within five to 10 years, analysts expect a significant proportion of the world’s population will be able to access sophisticated devices.

“At the same time, other developments in robust, cheap, widely deployable ubiquitous computing – that is, computing that is woven into the everyday fabric of our physical world – opens up the possibilities of an information infrastructure that can be used in conjunction with these mobiles.

“In studying very challenging contexts, it is possible to make discoveries that are applicable to other populations, globally. So, for many of the people we work with, due to their lower reading and writing skills, a visual touch screen is not always the best way to communicate with the device.

“We will have to innovate, for instance, on speech interfaces and gestures such as using pointing at an object with the mobile to signify a search term. In doing this we expect to also find better ways for people globally to interact with information and services.

“These new methods may help people everywhere to move away from the predominant ‘heads-down’ prodding at touch-screens that you can see widely on tube trains, in coffee shops and as people walk around town, oblivious to life happening around them.”