On Thursday, 10 July, two academics from Academi Hywel Teifi’s Welsh Department at Swansea University each scooped a prize at the glittering Wales Book of the Year awards ceremony in Galeri Caernarfon. 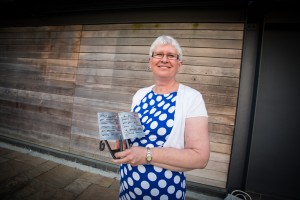 Rhwng y Llinellau includes individual sequences and poems composed between 2003 and 2013. There are poems written in response to works of art, autobiographical poems about childhood in the Rhondda Valley, journey poems, and special poems to friends and acquaintances.

Professor Alan Llwyd’s biography of the Welsh-language poet, R.Williams Parry, sheds new light on the poet and his work, challenging the traditional picture of it. In addition to discussing his poetry, this volume discusses his life, home, family, and education, and all of the influences on it.

During the awards ceremony, Literature Wales Chief Executive, Lleucu Siencyn, said: “We are delighted to have announced the winners of the 2014 Wales Book of the Year Award in Caernarfon. This is a book-loving town, and local support has ensured the success of this evening. Congratulations to Christine James, Alan Llwyd and Ioan Kidd. All three have succeeded in creating colourful characters in their successful volumes – some of which will capture the imagination of readers across Wales”.

During the same week as the Wales Book of the Year awards, the Archdruid, Christine James, was promoted as Professor of Welsh in Academi Hywel Teifi.

Gwenno Ffrancon, Director of Academi Hywel Teifi, said: “All of the staff within the Academi are delighted at Christine and Alan’s success. Their well-earned success highlights the high quality of research conducted within the Academi, as well as the creativity that thrives here. Congratulations to them both”.

For more information about the Wales Book of the Year awards, visit: www.walesbookoftheyear.co.uk