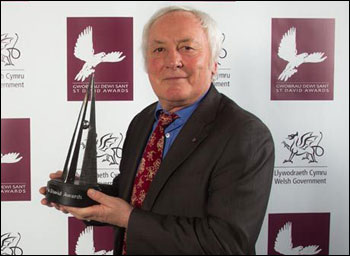 The new national awards scheme is organised by the Welsh Government and celebrates and recognises the extraordinary achievements of people in Wales.

Born and raised in Aberdare, Professor Evans was educated at Aberdare Boys' Grammar School, where he developed an interest in physics.

He went to CERN – the European Organisation for Nuclear Research –  initially as a research fellow, having previous visited the establishment in 1969, and from 1994 was involved in the planning of the project which would become the Large Hadron Collider (LCH).

As Project Leader of the LHC at CERN, Professor Evans was at the centre of operations during the construction and commissioning stage, through to the LHC’s start-up on September 10, 2008.

The first particle collisions took place in March 2010 and in July 2012 came the announcement from CERN of the discovery of the Higgs boson, which the LHC was built to find. In the same year, Professor Evans was awarded the 2012 Special Fundamental Physics Prize.

For more information on the St Davids Awards, visit http://stdavidawards.org.uk/?lang=en.