Swansea will be hosting the 2014 IPC European Athletics Championships, the first time that the event has been held anywhere in the UK.

The Championships will build on the impact of the 2012 Paralympic Games and put Wales firmly on the map as a nation that can deliver successful, high profile disability sport events. 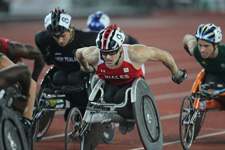 The successful bid, submitted by Swansea University, who will physically host the majority of the Championships, was based on a strong partnership approach involving The Welsh Government, The City and County of Swansea, Disability Sport Wales and British Athletics.

The bid promised to deliver a world-class event by combining extensive expertise in the delivery of the high profile championship events with considerable knowledge in the management and support of elite athletes.

Hosting training camps for both Mexico and New Zealand Paralympic teams, Swansea has already shown its ability to deliver for disability sport in the build up to London 2012. Staging the Championships, planned for August 2014, will help build on this legacy and support Swansea University’s commitment as a leading sporting facility and continue the City’s dedication to inclusive sport.

Professor Richard B Davies Vice-Chancellor Swansea University said: “We are pleased that the IPC has recognised that Swansea University, working with its partners, can deliver a high profile Championship event and acknowledges our commitment to disability sport.

“Wales is a proud sporting nation and nowhere is that pride more evident than when it comes to Paralympic and disability sport. Successive generations of Welsh Paralympians, coaches and support staff have contributed towards the success of our British teams.

“The IPC European Athletics Championships have never taken place in the UK before so we are proud that Swansea is leading the way in building on the momentum of the 2012 London Paralympic Games and raising the profile of disability sport across Wales and the UK. We look forward to delivering both a successful athlete centred Championship as well as a legacy that the whole of Wales and Europe can share and be proud of.”

Minister for the Economy, Science and Transport Edwina Hart, said: “I’m delighted that all partners involved have been successful in the bid to attract the IPC Championships to Swansea. Following the hugely successful London Paralympic Games, hosting the event will create another major opportunity to further develop the sport of athletics and the promotion of disability sport within Wales and the UK. The event will also generate a significant economic impact for the city and region as well as enhance Swansea and Wales’ international profile and reputation as host of major events."

Jon Morgan, Executive Director, Disability Sport Wales said: “Disability Sport Wales believes that Wales and Swansea is the perfect stage to host international events with high quality facilities to ensure that athletes can deliver their very best possible performances. Hosting the 2014 Athletics Championships would build on the phenomenal achievements of Welsh athletes at London 2012, as well as driving forward our legacy agenda and national programmes that we have developed over the past 10 years. We are committed to delivering an outstanding Championships that the whole of Swansea and Wales can be proud of.”

Cllr Nick Bradley, Swansea Council’s Cabinet Member for Regeneration said: “The success of the Premier League Swans and the Ospreys rugby team has already helped put Swansea on the international map, but the arrival of these major athletics championships will further reinforce our reputation as a top city of sport.

“Swansea successfully hosted the Mexico and New Zealand paralympic teams last summer in the build-up to London 2012 when athletes, coaches and their families were very complimentary about our city, the welcome they received and the quality of the sporting facilities here.

“These championships will continue to build on the great legacy of the Olympic and Paralympic Games. They will also boost the local economy by attracting thousands of visitors and will strengthen Swansea’s profile as a city that’s more than capable of attracting, hosting and staging major sporting events.”

British Athletics Paralympic Head Coach Paula Dunn said: “We’ve seen first hand how competing on home soil can really give our athletes a boost. Having watched how our home crowd can push us on to medal success, I am delighted that the 2014 IPC Championships will be staged by Swansea. It will be a key part of our athletes preparations for Rio 2016 and London 2017, and we would aim to use it as a springboard for even further success on the global stage.”