Unfortunately the side did not get through to the quarter-finals as they drew The Czech Republic, Russia and Slovakia in the group stage.

"The players look out for one another; the team spirit is probably the best it’s ever been, and I’ve experienced these Games in 2007 and 2009. It allows us to compete with teams whose players are on the ice three, four, five times a week - many of ours are on just once,” he said.

Luke, from Llanvair Discoed near Chepstow, was selected as a GB Net-Minder for the at the Winter Universiade in Trentino.

The team’s first game, against Russia, was televised live by Eurosport 2. It is also available to view on the BUCS You Tube channel. 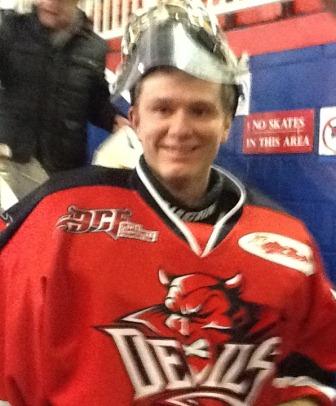 Luke is a joint honours student studying History & French at Swansea University. He is spending his third year in Lyon, France, on the Erasmus placement scheme.

While there he has been training with Lyon Lions ice hockey team.

The UK is sending 52 athletes to the games which are organised every two years by the International University Sports Federation (FISU).

About 1,800 athletes from 59 nations are taking part. The opening ceremony is on December 11.