The eighth Welsh Varsity Boat Race, between Swansea University and Cardiff University Rowing Clubs, will take place this Saturday (April 20, 2013) on the River Taff in Cardiff. 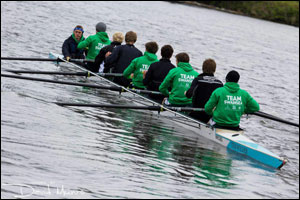 Established in 2006, the annual boat race sees students from Wales' two premier rowing Universities go head to head in the battle for the title of Welsh Varsity Boat Race Champions.

The day will see four races rowed between competing eights, beginning with the Novice Women’s VIII and Novice Men's VIII races (for those in their first year of rowing) at 12:25pm and 1:25pm respectively, followed by the Senior Women's First VIII at 2.25pm, and culminating with the showdown between the Senior Men’s First VIII at 3:25pm.

The races are rowed on the lower reaches of the River Taff, from Penarth Road Bridge to Cardiff Bay, over a distance of approximately two kilometres. The best vantage points for spectators to view the races include Clarence Road Bridge and Embankment and at the finish line at Channel View Centre on Jim Driscoll Way, Cardiff Bay.

Kate Housby, President of Swansea University Rowing Club, said: “Competition between the two clubs for the Welsh Varsity Boat Race Champions title is intense – and this year won’t be any different. Both clubs have been training hard for this during the head season and the efforts put in by the Swansea crews have been greater than ever before.

“We are well aware of the pressure surrounding a Boat Race win and this will undoubtedly be one of the highlights in our year – we have every intention of bringing the cup back to Swansea.

“The Welsh Boat Race promises to provide both competitors and audiences alike with a day of thrilling racing.”

The Welsh Varsity Boat Race, supported by Welsh Rowing (the governing body for the sport of rowing in Wales), marks the start of the annual Welsh Varsity games, the majority of which take place on Wednesday, April 24, culminating with the Welsh Varsity Rugby Match at the Millennium Stadium at 7:30pm.