The Times and the Sunday Times Good University Guide 2014, published in full on 22 September, shows that Swansea University has moved up into the top 50 UK universities.

The result comes only a few days after an international survey showed that  Swansea had also moved up amongst the top 500 universities in the world - which puts it in the top 5% of all universities globally. 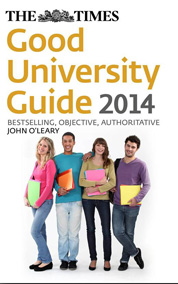 The Times and Sunday Times Guides have been combined for the first time this year, giving the most comprehensive guide to higher education in Britain.  In the 2014 Guide they analysed around 120 institutions across the country, looking at areas such as graduate prospects, student satisfaction and spend per student.  This year's Guide shows:

•    It is now in the top 20 in the UK for graduate job prospects, with 77% of graduates in professional jobs or graduate study

•    Increased demand for places in 13 out of 15 subject areas, including a 15% increase in languages, at a time of falling interest elsewhere, and a 64% rise in maths, computer science and engineering

“Most students who take up places seem to enjoy their time at Swansea with overall satisfaction higher than in most universities in Wales.”

“I’m really encouraged to see that we’ve moved into the top 50 UK universities in the new Times and Sunday Times Guide, which is one of the most comprehensive guides to higher education.   We're moving up the league tables, and are now nestling more within the research-led universities."

“This excellent result follows the recent news that we have moved up amongst the top 500 universities in the world, putting us in the top 5% globally."

"Our hard work on developing employability skills is paying off as we’re now 17th in the UK.  Our efforts to improve the student experience and increase our spending per student are also reflected in the results.”

“We’ve also recently achieved a top five-star rating for our teaching in the QS Awards, and won the Times Higher Education award for Outstanding Student Services team in the UK”

“The Times/Sunday Times survey therefore provides further evidence that Swansea University is on the way up”.