A pioneering team of doctors and specialists from Wales and the South West has been the first to successfully deliver xenon gas and cooling therapy in an ambulance to newborn babies suffering from lack of oxygen at birth. 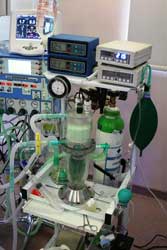 Dr John Dingley, Consultant Anaesthetist at Morriston Hospital, part of Abertawe Bro Morgannwg University (ABMU) Health Board, and Reader in Anaesthetics at Swansea University’s College of Medicine, designed and installed the equipment used to deliver the gas to two babies to date, en-route to St Michael’s Hospital in Bristol.

The pioneering technique of delivering cooling and xenon gas to babies has been developed by Marianne Thoresen, Professor of Neonatal Neuroscience at the University of Bristol along with Dr Dingley. This trial is being funded by the J P Moulton Charitable Foundation and SPARKS (Sport Aiding Medical Research for Kids).

In the UK, every year, more than 1,000 otherwise healthy babies born at full term die or suffer brain injury caused by a lack of oxygen and/or blood supply at birth. This can lead to lifelong problems such as cerebral palsy.

Speaking of the breakthrough, Professor Thoresen said: “Xenon is a very rare anaesthetic gas found in tiny quantities in the air that we breathe. In 2002 Dr John Dingley and I realised the potential xenon and cooling might have in combination to further reduce disability. Over the past eight years, we have shown in the laboratory that xenon doubles the protective effect of cooling on the brain.

“Previously babies would need to come to us at St Michael’s Hospital to start xenon gas treatment but we believe it is essential to start the xenon therapy as soon as possible after birth and often babies can’t get back to us within five hours to start the treatment.

“Now, Dr Dingley has designed and built the equipment to commence delivery of the xenon to babies while they are still at the referring hospital and then while they are being transferred. Hopefully this will mean that more babies will have the opportunity to take part in the trial.”

Dr Dingley has been developing equipment in Swansea for xenon anaesthesia in adults and more recently babies for over 10 years. His machine takes the exhaled gas, removes waste products from it and re-circulates it to be breathed again without any loss to the outside air.

Explaining the latest development, he said: “To reduce delay between birth and treatment it is now common to start cooling therapy during the ambulance transfer and we wanted to do this with the xenon as well. Therefore, I developed a very compact version of the xenon breathing system we are currently using in the baby unit, which fits a small space on the ambulance baby transport system. This means xenon can be delivered to the lungs continuously, even while the baby is being moved.

“The system needs to recirculate all the breathed gases to contain costs as xenon is extremely expensive, around £30 per litre. In order to prevent any loss of xenon, the entire circuit is custom moulded and single-use, i.e. used in one baby only. This construction method has a big advantage in that it has hardly any connections which can leak, so making the system extremely efficient in terms of xenon consumption. This is vitally important to contain xenon costs.

“In addition, medical xenon is only available at present from Germany in very large cylinders, which would be a problem to carry in the ambulance along with all the other equipment. However, because the breathing system has proved to be so gas-efficient in the babies we have already treated in Bristol, the knock-on effect was that we realised that we did not need to take the xenon cylinder with us in the ambulance at all.

“A simple reservoir holding two or three litres of xenon is quite sufficient for a journey of several hours, so this is all we need to take with us to run the system effectively. This allows us to give 50% xenon in the breathing gas from the time we pick up the baby, throughout the ambulance journey, continuing during transfer from the ambulance into the hospital without any breaks in treatment whatsoever.”

Commenting on the successful treatment, Professor Keith Lloyd, Head of Swansea University’s College of Medicine, said: “Dr Dingley's research here in Swansea highlights the real health benefits that can be gained through collaborative research between the NHS and universities.”

St Michael’s Hospital and the University of Bristol has pioneered new treatments for brain injury in babies since 1998, showing that cooling babies after a lack of oxygen could reduce damage in the newborn brain. Clinical trials of cooling have now proven that mild cooling by only a few degrees for 72 hours is a safe and beneficial treatment. However, cooling only partially reduces disability and does not prevent it in all babies.

The search has been to find a second treatment that could be added to cooling to further reduce disability. From 2010 to 2011, for the first time in the world, 14 cooled infants at St Michael’s Hospital took part in a study examining whether xenon could be delivered safely and without side effects. This was carried out successfully enabling ethical approval for the current study comparing xenon and cooling with the standard of cooling therapy on its own.

So far, 16 babies have taken part in this randomised controlled trial. Around half of them have had xenon and cooling and the other half the standard cooling therapy. The plan is to recruit 84 babies to the trial, the number predicted to be needed to show a difference between the two groups.