The Spring edition of the Biotechnology and Biological Sciences Research Council’s (BBSRC) Business magazine contains a feature on the work of scientists at Swansea University’s College of Medicine and the Karolinska Institute in Stockholm, Sweden, who have identified two steroids-type molecules that play an important role in the survival and production of nerve cells in the brain. 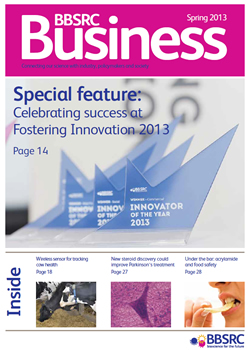 The discovery, which was published online in the international journal Nature Chemical Biology earlier this year in January, may be significant in the long term for the treatment of several diseases, such as Parkinson's disease.

Professor William J Griffiths and Dr Yuqin Wang at the Institute of Mass Spectrometry, College of Medicine, lead the work at Swansea University, supported by the BBSRC. Read more about their work here.

The Institute of Mass Spectrometry: Swansea University has long been established as a centre of excellence for mass spectrometry, dating back to the mid-1970s with the establishment of the Royal Society Research Unit led by Professor John H Beynon FRS.

The established mass spectrometry research unit attracted the siting of the Engineering and Physical Sciences Research Council (EPSRC) Centre in 1986.  This prestigious EPSRC mid-range facility is open to all UK university research groups, with priority given to EPSRC-funded research, and some capacity is reserved for commercial service.

It specialises in difficult analyses that scientists cannot do within their own institutions due to lack of expertise or instrumentation and is particularly relevant in the fields of chemistry, biological sciences, medicine, materials science, forensics, pharmaceuticals and environmental analysis.

Mass spectrometry involves the ionisation of a sample to produce either positive or negative ions of the molecule species.  These ions are passed to the mass spectrometer analyser where the mass, elemental composition and structure of the molecule are determined from the spectra produced.  Analysis of complex mixtures can be accomplished by attaching a chromatographic technique to the mass spectrometer to separate the various species in the mixture prior to mass measurement.

The Institute of Mass Spectrometry has, over the last three decades, been responsible for many innovations in mass spectrometry and instrumental design that have been taken up by major manufacturers’ of scientific instrumentation.

In March 2013, it was announced Swansea University’s College of Medicine had been awarded £3million to continue hosting the EPSRC's premier research facility in Mass Spectrometry. Read more here.