A framed picture of Welsh Chartist leader John Frost has been loaned by Swansea University’s South Wales Miners’ Library for an important historical exhibition in Parliament to celebrate the Chartist Movement. 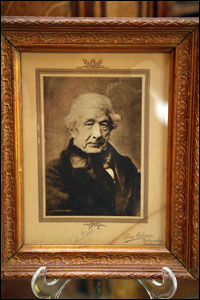 The exhibition was opened this week by John Bercow, the Speaker of the House of Commons, and chaired by Aberavon MP Dr Hywel Francis.

Dr Francis said: “This was the first time that the Chartists – the first movement to call for a full democratic system of parliamentary government – have been recognised within the Palace of Westminster.

“As chair of the All Party Group on Archives and History I was delighted that Mr Speaker Bercow opened the Chartist exhibition and said how important the Chartists and later the Suffragettes were in campaigning for parliamentary democracy.”

‌The picture of John Frost was deposited at the South Wales Miners’ Library shortly after it opened 40 years ago.  It was given to the Library by Edgar Evans of Bedlinog, who had received it form the family of Joe Sparkes, a great-grand nephew of John Frost. 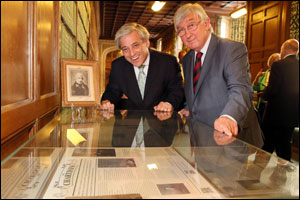 The exhibition will be on display in Parliament until the end of October.