New research examines the spread and evolution of food poisoning

A Swansea University academic has developed a new method of genome mapping which has uncovered how a food poisoning bug that affects people is transmitted through other animal hosts. 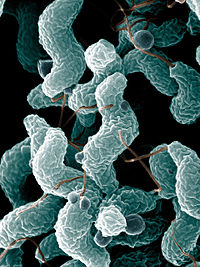 Dr Sam Sheppard of Swansea University’s College of Medicine, along with a team of researchers, has published the findings in the prestigious Proceedings of the National Academy of Sciences of the United States of America (PNAS)  and details the development of a new method for genome-wide association mapping in bacteria.

Genome-wide association studies have completely revolutionalised human genetics. This is the first time that a comparable method has been developed for bacteria.

Dr Sheppard said: “Using this method we are able to analyse the thousands of bacterial genomes that are now routinely sequenced and archived in Swansea, and this improves our understanding of how these germs are spread and evolve.

“In this paper we apply this new technique to investigate the emergence of Campylobacter as a food poisoning bug and identify how it has undergone genetic changes and adapted to infect not only birds but mammals including humans.

“Most disease-causing bacteria, such as E. coli and MRSA, are very common in healthy people, but can sometimes cause serious disease. By helping to understand what makes some bacteria good and some bad we can more effectively combat infection. “