Hopes that insect pathogenic fungi can provide a safe and natural alternative to chemical pesticides have been given a major boost by new research into insect resistance just published by a team including Swansea University scientists. 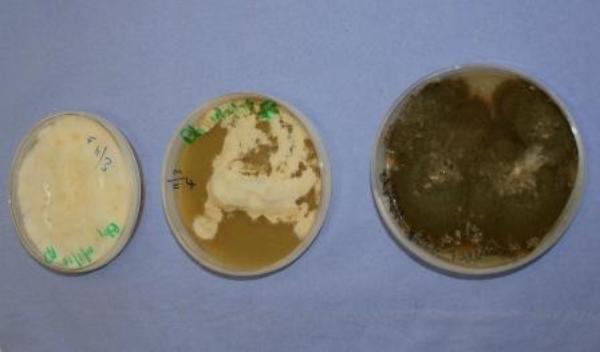 Picture: Fungus in the lab, including Beauveria bassiana (left) used in the research

Working with colleagues in Russia and Germany, the researchers found that although insects did develop resistance to insect pathogenic fungi, they were less able to breed as a result. The findings strengthen the case for fungi as a pesticide compared to chemical alternatives.

The research, published in PLoS ONE and the Proceedings of the Royal Society, was carried out on a species of moth which is a pest in bee hives.  It comes only weeks after the European Union voted to ban chemical pesticides on crops attractive to honey bees, following concerns over a dramatic decline in the bee population.   However, the potential benefits of this research go far beyond bees.

Over 700 species of fungi have been identified as potential pesticides.   As well as killing crop pests, some kill insects that harm human or animal health, such as midges and mosquitoes.

Researchers exposed 25 successive generations of the moth to the fungus Beauveria bassiana.  They analysed the moths’ reactions, looking at resistance, but also other factors such as stress.

The researchers found that resistance did increase, but by studying other factors they could see that the cost to the insect of building up this extra defence was enormous:

‌‌Picture:  Prof Tariq Butt with some of his research team

Dr Miranda Whitten from the Institute of Life Science at Swansea University said:

“The big question with any pest control is whether insects will become resistant.   Our research with fungi clearly shows that while insects do build up resistance, there is a very big price to pay. Most importantly, they can’t breed as well.

Having their immune system on a high state of alert may be damaging to them, plus there is some evidence that they are more vulnerable to other infections.  Also the increased resistance applies only to that one fungus.   All of these factors strengthen the case for fungus as a natural alternative to chemical pesticides.”

Professor Tariq Butt from the College of Science at Swansea University said:

“Although our experiments were on moths, it gives us an indication of what would happen in other organisms.  It provides a useful model to test things on.   One of the key findings is that insect resistance isn’t just about the immune system.  The stress management system also plays a key role.  That’s why it’s important to look at the whole picture, not just immunity.”

Dr Ivan Dubovskiy, from the Institute of Systematics and Ecology of Animals at the Russian Academy of Sciences in Novosibirsk, who was visiting his colleagues in Swansea, said:

“The research can help us make biological pesticides more efficient.  If we know more about how insects develop resistance to natural pesticides, it can help us unlock their defences.”