Finance Minister Jane Hutt visited an EU project at Swansea University which has helped to inspire over 4,300 young people across Wales to invent the next big hi-tech sensation.

Technocamps, which helps open up the world of computer science and STEM (Science Technology, Engineering, Maths) subjects to young people, will host a robotics workshop at Swansea University for pupils from St David’s School, Pembroke.

Led by Swansea University, in partnership with Aberystwyth, Bangor and Glamorgan universities, Technocamps is backed with £3.9m from the European Social Fund through the Welsh Government. 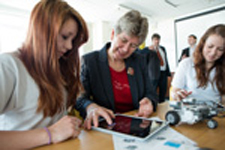 During her visit, Finance Minister Jane Hutt spoke to the pupils of St David’s School about their future career choices and aspirations.

She said: “Ensuring our young people are equipped with the right skills to secure high quality jobs in the 21st Century workplace is a priority in our Programme for Government. I am pleased that we have been able to invest EU funds to help encourage young people to take up computer science and STEM subjects which will improve their future career prospects, and ultimately help drive Wales’ global competitiveness.”

As well as St David’s School, the project has been benefiting a host of young people from 50 different schools across the Convergence area of Wales, including Alfie Hopkin of Llanelli who has had a computer game accepted onto the Apple App Store. The 14-year-old from Pwll helped design a festive game “Present Collect” while taking part in a Technocamps workshop.

After a few tweaks, the Glan y Mor School student submitted the game to Apple — and was delighted when it was accepted.

Alfie said: “I think that Technocamps was a great experience, it was a chance for me and others to see what iOS (iPhone Operating System) game development was like and to even have a go ourselves. I suggest any teenager that is into computer games or programming should try it. It was great fun!”

The project is also encouraging more girls to learn skills that will provide them with opportunities in the digital economy, including through ‘Technocamps for girls’ workshops held during school holidays.

Workshops and bootcamps, aimed at 16-19 year olds, are also held on programming, app development, robotics and building your own computer.

Professor Faron Moller, Director of Technocamps at Swansea University, said: “I am really pleased that so many young people are benefiting from our project. The individuals highlighted are just examples of how the project has really influenced decision making and future aspirations in young people to study or work in computer science and STEM.”