National Theatre audiences for a new production of “From Morning to Midnight” will benefit from the expertise of Swansea University Professor of German Julian Preece, who was asked to write the introduction to the play in the programme.

Entitled "Art and the Abyss", Professor Preece’s article outlines the context in which the play was written: Germany on the eve of the First World War.

Written by Georg Kaiser in 1912, and described by the National Theatre as a masterpiece,  From Morning to Midnight  explores the tragedy of an ordinary man who steps outside his humdrum life and, over the course of one crazy, alienating day, destroys himself. 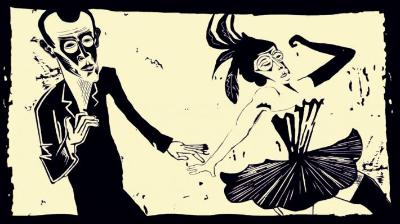 Knocked for six by his lust for an exotically perfumed woman from Florence, a trusted bank clerk of twenty-five years’ standing shoves a stolen fortune in his pocket and runs to her hotel, where his ludicrous advances are rejected.

But, he’s broken free and there’s no turning back. He ditches his family and their bourgeois existence to embark on a roller-coaster odyssey, scouring the city’s senseless entertainments in search of an experience worth buying and a reason for living.

I am a changed man! I have sixty thousand marks and I’m going to decide for myself what is and isn’t pointless so to hell with you!

The play, which was banned for its portrayal of the Kaiser, was written at a time when Berlin, Germany – and indeed much of Europe – were undergoing enormous social, political and cultural changes.

"In some ways the whole Continent was at its zenith in the field of cultural and intellectual achievement around 1912.

Writers and artists were worth taking seriously because their works changed the ways in which the world was understood and thus legitimated and ordered.

The mid-century dictators all had policies on literature.  They burned books and deported their authors to labour camps because they posed a threat.

The German capital offered anonymity, chance encounters, crass contrasts in wealth and temptations galore.  Its sheer scale and newness could not fail to impress.

Berlin was doubling in size more or less every decade in the latter part of the nineteenth century and in the run-up to 1914 Germany as a a whole was growing economically as fast as China is today."

‌
From Morning to Midnight opens on 26 November at the Lyttleton Theatre, National Theatre, London.