The annual Welsh Varsity battle between Swansea and Cardiff Universities will be held at the Wales Millennium Stadium on Wednesday 24 April. 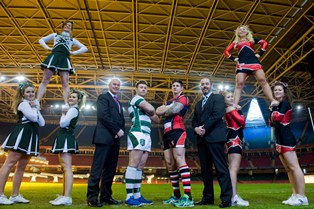 The centrepiece rugby match, witnessed by over 15,000 spectators last year and considered the biggest student event in Wales will kick off at 7.30pm after a week long battle of competitive sports in 25 different fields including hockey, cricket, squash, rowing and lacrosse.‌

Swansea University have regularly enjoyed the ability to select from a vast pool of very talented players including the likes of Alun Wynn Jones, Ritchie Pugh and Dwayne Peel. 2007 saw Swansea field no less than 11 FIRA Internationals at varying ages resulting in a win at Cardiff Arms Park.

Welsh Varsity has grown year on year since it began in 1997 and matches were held alternatively at Cardiff Arms Park and Swansea’s St Helens. The match has been played on neutral ground since 2003, at Bridgend’s Brewery Field, Swansea’s Liberty Stadium and the Millennium Stadium.

Former Wales international and Swansea University 1st XV member Paul Thorburn will be keeping a keen eye on 2013’s student stars as he takes up a new role as Welsh Varsity Chairman this month.

He said: “There has always been strong rivalry between these two great rugby institutions however nowadays the fixture has the added spice of attracting close to 20,000 spectators. The occasion is a must for all rugby lovers, not only because of the carnival atmosphere, but also because of the style and manner in which the game is played. With the teams less reliant on inflexible patterns often associated with the professional level, the crowd will be entertained with a far more instinctive approach, which is refreshing.”

Imogen Stanley, Swansea University Students’ Union Sports Officer added: ‘It is the culmination of all the hard work, hours spent running in the rain and cold to finally take on our biggest rivals in the Capital City. Varsity is about using our fantastic community feel on campus to get behind our teams and athletes. Without such passionate support led by students, Varsity wouldn’t be the event that it is. On behalf of the Students’ Union and Sport Swansea team I wish everyone the best of luck and can’t wait for the big day.’’

With just over two months to go until the big day, organisers are expecting tickets to be snapped up quickly by students, alumni and rugby fans.

Tickets are on public sale now priced at £15 and £12.50 for students. Further information can be found at welshvarsity.com

Information about Swansea University RFC can be found at pitchero.com/clubs/swanseauniversityrfc