A film entitled ‘GLIMPSE: Greenland's disappearing ice’ will be premiered for the first time through the medium of Welsh on Friday 8 June 2012 at 3pm in the GwyddonLe pavilion on the Urdd Eisteddfod maes. 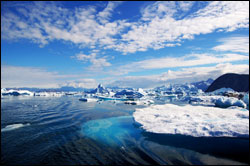 The film documentary follows a team of Swansea University glaciologists on adventurous field research to investigate how and why Greenland’s ice is changing. The film has been entirely shot, edited, and produced by Swansea Glaciology Group researchers, in collaboration with 196 Productions.

Among the film’s highlights are a dramatic time-lapse footage of a huge iceberg calving event, a wild storm amongst the icebergs, a close encounter with a polar bear not forgetting the stunning landscapes, mountains and glaciers of Greenland’s remote fjords.

At the end of the film, there will be an opportunity to talk to scientist who star in the film and have a first-hand view of science in action. 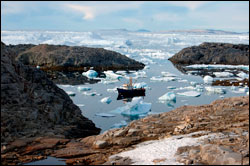 Professor Murray said: “We are extremely pleased that the film is available through the medium of Welsh and I sincerely hope that visitors to the Urdd Eisteddfod maes flock to GwyddonLe on Friday afternoon. Greenland is an inspiring place to do science and this film is a wonderful way for us to show people what it’s really like to live and work in Greenland, as well as how the ice sheet is changing. And of course, the changes that happen in Greenland affect us all.”

Watch a trailer of the 'GLIMPSE: Greenland's disappearing ice' film in Welsh here.