The Higgs Boson, the Big Bang, the Universe and Everything

What did the Universe look like right after the Big Bang? How do quarks and gluons behave inside neutron stars? Where does mass come from? What will be revealed next about the Higgs boson and the Large Hadron Collider (LHC)?

These and other questions will be addressed by more than 100 scientists from around the globe who are gathering at Swansea University for the four day "10th International Conference on Strong and Electroweak Matter" starting today.

One of the highlights will be an appearance by Professor Peter Higgs of Edinburgh University, best known for proposing Higgs boson in 1964 which until last week had remained famously elusive.  Prof Higgs will deliver the keynote lecture entitled ‘My life as a boson’ at the conference.

His appearance follows the exciting announcement last week about the discovery of the Higgs boson by scientists at the LHC at the European Organization for Nuclear Research (CERN) in Geneva.

Prof Higgs played a key role in the development of the Standard Model, which is the current theory of fundamental physics and proposed the existence of a particle known as the Higgs boson that provides other elementary particles with mass.

The search for the Higgs boson is central to the LHC programme at CERN and its existence provides scientists exploring how the Universe works with the final piece in the puzzle. 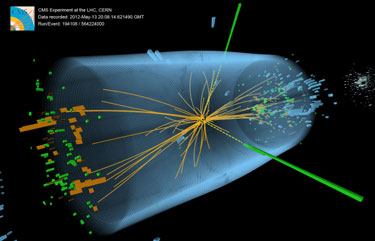 At his lecture Professor Higgs will introduce the ideas of spontaneous symmetry breaking, and discuss how these developed from their application in condensed matter through the earlier work of Yoichiro Nambu and Jeffrey Goldstone, to the work of Robert Brout, Francois Englert and himself in 1964 and will also look at the application of these ideas to electroweak theory.Professor Gert Aarts, who is chairing the organising committee said: "We are extremely proud that Prof Higgs will come to Swansea for this lecture, which has followed hot on the heels of the historic, groundbreaking news from CERN

"The members of the Particle Theory Group of the Physics Department in the University's College of Science work on a wide variety of problems in elementary particle physics; to organise a Conference that attracts researchers from Europe, North and South America, India, China and Japan is an excellent way to celebrate the world-class research undertaken in Swansea."

For more information about the conference please visit: http://pyweb.swan.ac.uk/sewm/